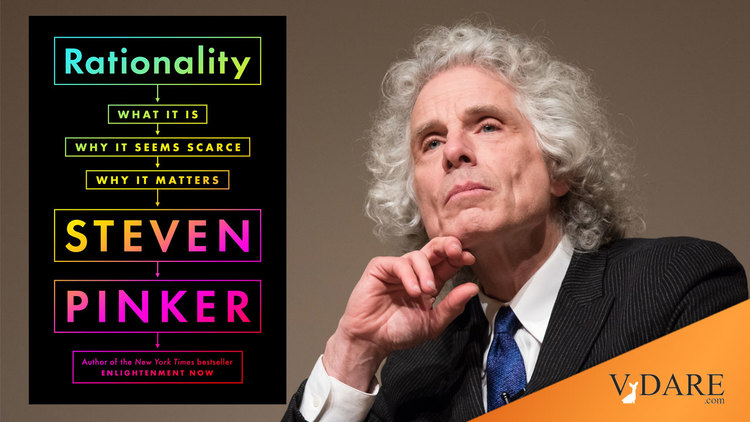 In Steven Pinker’s latest book, Rationality: What It Is, Why It Seems Scarce, Why It Matters, the best-selling cognitive scientist comes out, perhaps unsurprisingly, in favor of rationality.

Since the 1990s, Pinker has been a leading spokesman for a sort of ultra-sophisticated common sense. Rationality is his guide to how to think, a fun textbook version of Pinker’s popular Harvard class General Education 1066: Rationality. Thus, Rationality is more Pinker in his educator mode than in his polemicist mode (in contrast to his argumentative last book, Enlightenment Now).

So, much of Rationality won’t be wholly novel to people who, say, had read the classic blogs of the early 2000s. But, as Pinker points out in discussing the replicability crisis that has embarrassed much of psychology (other than IQ researchers, as he bravely pointed out in 2015):

As the physicist John Ziman noted in 1978: “The physics of undergraduate text-books is 90% true; the contents of the primary research journals of physics is 90% false.” It’s a reminder that Bayesian reasoning recommends against the common practice of using “textbook” as an insult and “scientific revolution” as a compliment.

Sometimes, Pinker is amusingly impatient with time-worn conundrums. For example, should you shove a fat man to his death to stop a runaway trolley from running over five workers on the tracks?

Nah. Instead, Pinker observes, the truly rational thing to do is to shout to the workers: Get off the tracks, there’s a trolley coming!

On the other hand, Pinker devotes seven pages to the famous Monty Hall Problem.