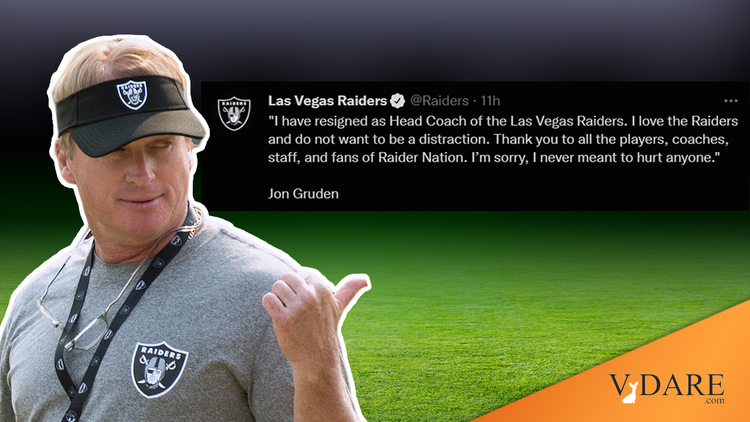 Sailer: Like All Oakland Raiders Fans Everywhere, I Am Shocked, SHOCKED To Learn That The Raiders' Football Coach Made Coach-Like Remarks In 2011

When the vaunted professional football coach Jon Gruden was confronted with a racist email he had sent in 2011 to insult the head of the players’ union, he said he went too far but didn’t have “a blade of racism” in him.

But N.F.L. officials as part of a separate workplace misconduct investigation that did not directly involve him have found that Gruden, now the coach of the Las Vegas Raiders, casually and frequently unleashed misogynistic and homophobic language over several years to denigrate people around the game and to mock some of the league’s momentous changes.

He denounced the emergence of women as referees, the drafting of a gay player and the tolerance of players protesting during the playing of the national anthem, according to emails reviewed by The New York Times.

Now, he is planning to leave the team, according to reports by the NFL Network and ESPN, which cut into its broadcast of “Monday Night Football” to say that Gruden would no longer coach the Raiders. …

The league said last week that it shared emails with the Raiders in which Gruden made derogatory comments. …

… In that email, Gruden, who is white and was working for ESPN at the time, criticized Smith’s intelligence and used a racist trope to describe his face. …

Whereas nonwhite males in the football business are famous for their sensitivity and discretion about vocabulary.

Their banter flies in the face of the league’s public denouncements of racism and sexism and its promises to be more inclusive amid criticism for not listening to the concerns of Black players, who make up about 70 percent of rosters.

Black football players would never ever make fun of a homosexual.

The N.F.L. has in the past struggled to discipline personnel who have committed acts of domestic violence and been condemned for failing to adequately address harassment of women, including N.F.L. cheerleaders.

The solution is obviously to give more power to blacks, since they never do that kind of thing.

… Goodell instructed league executives to look at more than 650,000 emails during the past few months, including those in which Gruden made offensive remarks.