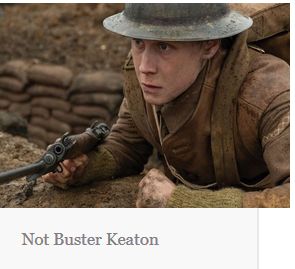 2019 turned out to be a good year for quality guy movies after all, as several veteran directors ignored the anti-male zeitgeist and just shot the films they’ve long wanted to make, such as Joker, Once Upon a Time…in Hollywood, The Irishman, and Ford v Ferrari. Sam Mendes, for example, delivers in 1917 an admirable if gimmicky videogame-style World War I movie inspired by his beloved grandfather’s stories of two years of fighting as a lance corporal in Flanders Fields.…

The Corporal Scofield character is portrayed by George MacKay, who looks like Buster Keaton in Dough Boys, with the kind of pale, immobile face that movies liked a century ago. In fact, much of the movie resembles an unfunny Buster Keaton movie in which Buster is constantly running past catastrophes.

For an example of Buster Keaton running: