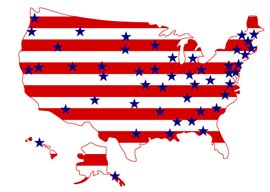 Sailer in "Taki's:" the Density Divide

The concept of America being divided into sprawling red Republican regions and dense blue Democrat districts first became a cliché In November–December 2000. Over the past decade and a half I’ve probably thought as much about the underlying reasons as anybody, and in this column I’d like to speculate on an even more fundamental cause behind the red-blue divide. …

A vague but fundamental difference, noted at least since the Roman satirists, is that low-density locales see man striving against nature, while high-density cities encourage man to compete more with man for higher status. The former competition tends to be relatively objective, while the latter is more subjective.

These distinctions shouldn’t be exaggerated, but they do map to some of the differences between red and blue America.

Different densities appeal to different personalities. For example, the frontier was always assumed to be where a man could be free from matronly tyranny, a major theme of American letters. Huckleberry Finn sums up that he’s headed for Oklahoma “because Aunt Sally she’s going to adopt me and sivilize me and I can’t stand it. I been there before.”