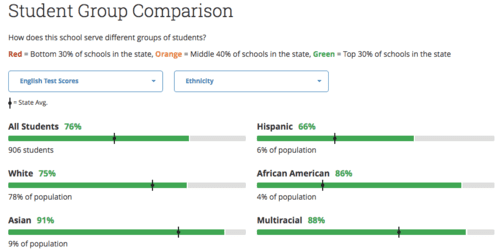 Something that very few Americans are aware of is how incredibly consistent the racial gap in school test scores is. I’m constantly reading articles from across the country about local school leaders puzzling over why their district happens to be plagued with a racial gap in school achievement. “What are we doing wrong?” they wonder.

But racial gaps are almost universal. I’ve been looking for years for a school where blacks outperform whites, and … I’ve finally found one!

It’s right here in the San Fernando Valley, which fits with my walking-down-the-street observation that San Fernando Valley blacks are pretty close to what postwar liberals like movie director Stanley Kramer hoped for a half century ago. It’s an LAUSD elementary school named Carpenter. It’s only 4% black, but 86% of the three dozen black students score “proficient” or “advanced” on their state English test versus 75% of the white students.

Carpenter is in the posh district at the base of the Hollywood Hills, south of Ventura Boulevard and east of Laurel Canyon, near Jerry Pournelle’s house. If you follow the Twitter account Los Feliz Daycare, you’ll understand Carpenter’s demographics. In 2013, Sandy Banks wrote in the L.A. Times:

Part of what accounts for Carpenter’s high achievement is not mysterious at all. It’s not burdened with social and economic problems. Its demographic profile is nothing like a typical Los Angeles school.

Carpenter is 78% white in a district that is 73% Latino. Only 7% of its students are from families poor enough to qualify for free lunch; three-quarters of district students are. And only 5% of its pupils don’t speak English, in a district where one-third of students aren’t fluent English speakers.

But parents insist that something less tangible is more important to its success. “It’s the sense of community,” said Rebecca Silverstein, whose two children — Milo, 9, and Poppy, 6 — raved about their teachers and their campus.

I interviewed them as they walked home from the school with its white picket fence, along one of the narrow streets winding up into the Hollywood Hills.

The school and the community have “a small-town feel,” Silverstein said. “You go to school with your neighbors. Your children play on the same sports teams. You go to a school event and see the family that lives next door.”

I’ve often pointed out that the entertainment industry, along with the sports industry, attracts the highest achieving blacks.