Roy Beck: Don't Make the Most Vulnerable Americans Pay the Cost of Amnesty

Roy Beck, of NumbersUSA, appeared Monday on MSNBC to discuss Obama’s illegal amnesty (spare video link). While much of the chatter lately has been about deportations, Beck emphasized the central issue regarding the policy’s effect on the American people: The work permits are the amnesty.

ROY BECK: We want members of Congress to think that it is radioactive to add millions of more work permits to illegal aliens, allowing them to have access to almost every job in America, while the labor force participation rate for every group of Americans is going down. That should be radioactive. So it’s very important to constantly tie the immigration issue to the job issues, and the fact is newspapers and your programs are full of stories about how badly most American workers are doing during this economic recovery. . .

This [amnesty] opens up every job in America to them. There are large parts of the economy that illegal aliens aren’t able to move into. They can’t work for employers that are law-abiding; they can only work for criminal employers. . .

We have to constantly put our focus on the vulnerable Americans, like those in Ferguson. . .

NumbersUSA’s new print ad emphasizes open borders’ effect on American workers. It’s interesting how the concept of supply and demand is little mentioned in today’s discussion of lawless immigration, but it should be a top concern. 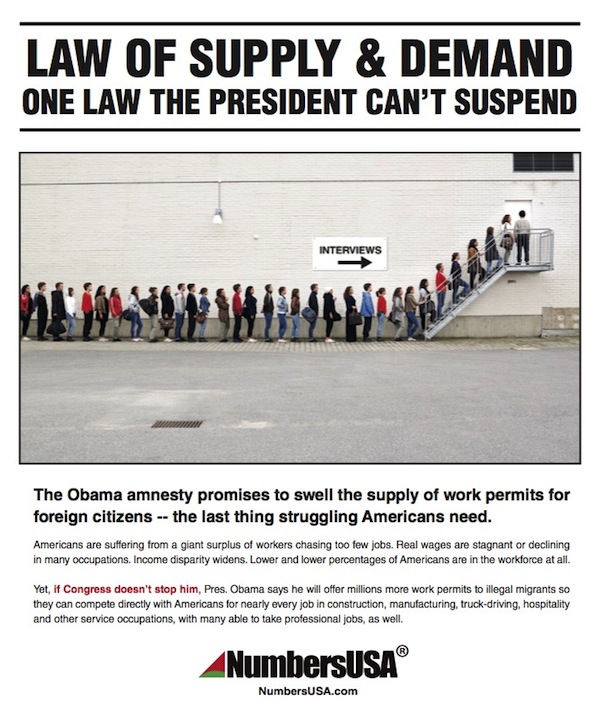