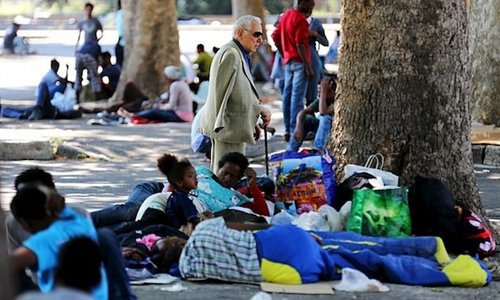 Rome's Mayor: The City Is Swamped with Unwanted Illegal Aliens

Above, foreign scroungers lounge about near Rome’s Tiburtina train station earlier this summer.

Over in the European spots popular with illegal aliens, the newbie squatters are cluttering up the place. Where to put them so the locals won’t trip over the diverse invaders?

Italy is unlucky in geography, with its southerly island of Lampedusa located just 70 miles from Africa, making it an easy destination for moocher fleabags. Modern communications have shown third-worlders that a more luxurious life is available if they can reach Europe and claim victimhood.

Europeans better wake up to the unforgiving demographics. The UN has a new report out, forecasting more rapid population growth than earlier projections: 11 billion humans on earth by 2100.

The growth leader is Africa, exploding from 1 billion today to well over 4 billion in 85 years: 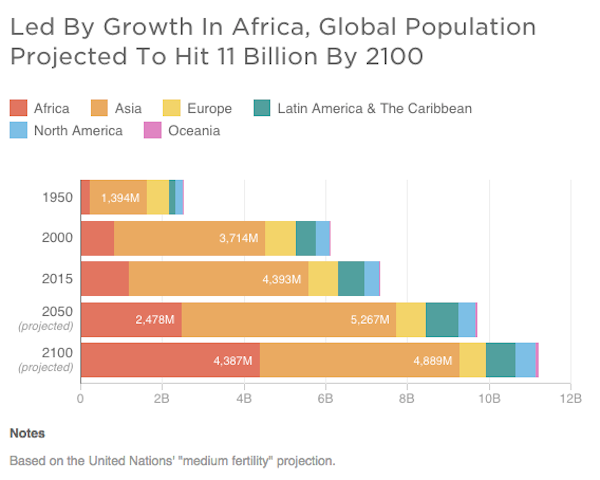 And every African who is allowed to stay in Europe will be texting the rest of his family to join him in the wealthy first world, where welfare offices hand out free money to anyone with a hard-luck story. There’s no reason for millions not to come when Europe makes itself so attractive.

Rome receives the second-largest number of refugees among Italian cities, but Mayor Ignazio Marino has warned that the Italian capital is reaching saturation point.

His warning comes less than a month after violent protests broke out over the arrival of 100 refugees in Casale San Nicola, a suburb in the outskirts of the city.

Concerned about how to accommodate more refugees, Marino said the city is “overcrowded”.

“We can’t welcome 18 to 20 percent of people who arrive in our country. We don’t have the resources,” he was cited by Ansa as telling a Lower House commission on immigration on Tuesday.

With reception centres bursting at the seams, refugees set up a makeshift camp outside Rome’s Tiburtina station in mid-June before it was raided by police.

Several leaders in Italy’s wealthier north have refused to bow to a government call to take in more refugees, but this is the first time concerns have been voiced by the Rome mayor.

But tensions over immigration have escalated across Italy in recent months. A day before the Rome protests, residents in a Treviso district burnt furniture intended for refugees in protest against their arrival. The refugees were eventually taken to an empty police station outside the city.

Marino is also under pressure to fix the city’s myriad other problems, including its transport system, the maintenance of monuments and its waste issue.