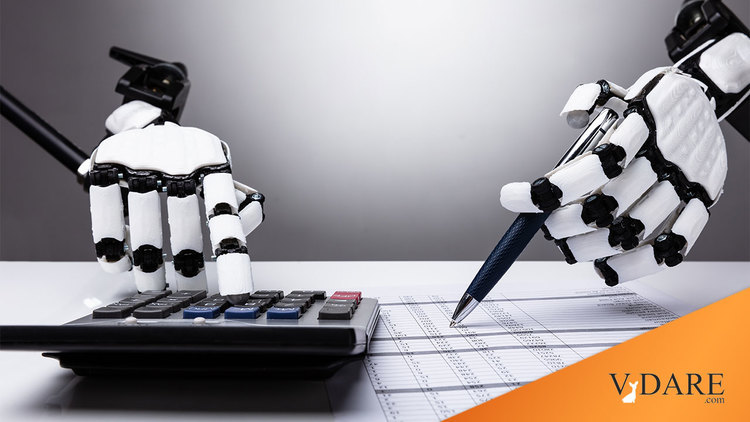 `Robots Will Become Omnipresent` According to Google CEO—So Why Do We Need Unskilled Immigrants?

In Washington, legislators are barraged by billionaires demanding an open door for cheap immigrant workers, from techies to dishwashers. But in the workplace, smart machines are increasingly performing complex tasks formerly done by human workers. That transformation is partially to blame for the jobless recovery, in addition to the administration’s business-unfriendly policies of course.

The author also opined that the 2013 estimate from Oxford University that 45 percent of American jobs would be automated in 20 years was too conservative; he thought the job loss would occur faster than that.

Below, a robot packs boxes in a manufacturing plant. Many instances of robot jobs displacement occur away from the public eye. 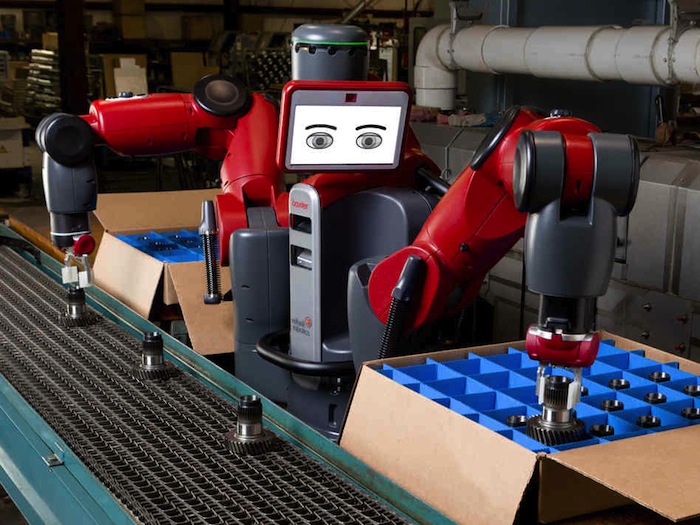 One of the leaders of the smart machine revolution is Google CEO Eric Schmidt, who says we are only at the beginning.

With a jobless future being created by tech elites, American workers don’t need an amnesty and doubling of legal immigration.

Google Chairman Eric Schmidt spoke about Google’s bevy of recent robot acquisitions at the Oasis: The Montgomery Summit conference in Santa Monica, California, on Tuesday. “We’re experimenting with what automation will lead to. Robots will become omnipresent in our lives in a good way,” Schmidt said, according to a report from Bloomberg.

Schmidt went on to say that he thinks automated technology will “replace a lot of the repetitive behavior in our lives.” Robotics and artificial intelligence are two arenas that Google has been heavily investing in to stay ahead of the next big technological advancements.

“The biggest thing will be artificial intelligence,” Schmidt said, per Bloomberg. “Technology is evolving from asking a question to making a relevant recommendation. It will figure out things you care about and make recommendations. That’s possible with today’s technology.”

Google has been steadily collecting robotics and artificial intelligence companies over the past several months, leading the tech press to speculate widely about a dystopian future occupied by Google-designed robots. In December, Google purchased the robotics company Boston Dynamics, which has long been a Pentagon contractor and is known for building creepily animal-like robots. Boston Dynamics was the eighth robotics company Google purchased in the past six months.

Google has been developing so many robots that it recently purchased an airplane hangar from NASA as a place to house and test them. NASA agreed to rent out the space as a way to cut costs, and Google has agreed to update some of the structures in addition to building a museum on the property. The biggest building purchased in the deal was Hangar One in Moffett Federal Airfield, just a few miles from Google’s headquarters in Silicon Valley. The building has a floor plan of eight acres and a long history of housing the world’s biggest and most cutting-edge tech projects.

As for artificial intelligence, in January, Google purchased a mysterious AI company called DeepMind, which is known for employing some very talented engineers. The DeepMind founders will join inventor and author Ray Kurzweil, who currently heads Google’s team of engineers working on artificial intelligence and language processing. One of Kurzweil’s projects includes making a search engine so smart that it would act like a “cyberkinetic friend.”

As for the robotics side, Google could use its robots to better automate factories. According to a recent report from the Wall Street Journal, Google has also been quietly working with Chinese tech supplier Foxconn on the development of its robotics for use in automating the assembly process. Sources who spoke to the Journal said that Android head Andy Rubin has been working with Foxconn Chair Terry Gou since last year on creating robotics to be used in Foxconn’s manufacturing operations. Analysts who spoke to the Wall Street Journal said such a partnership makes perfect sense, as it would be beneficial for both companies.

Overall, Google is looking to move into new tech territory in order to make up for lost revenue in its main Internet search business. As more people switch to mobile for their computing needs, Google is losing out on ad dollars, since mobile ads typically cost less than desktop ones. Google believes the answer to this dilemma is to work harder at developing new technology, and the company is making a big bet that robotics will be the way of the future.