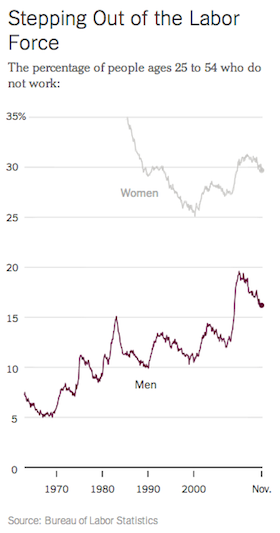 It’s a decent overview of the present transformation of the means of production of goods and services, including some observations about the effects on would-be workers. It includes a chart of the shrinking proportion of Americans who have left the labor force. The piece recites the usual arguments that robots “assist” rather than replace, but then lists occupations headed for obsolescence like drivers, telemarketers, paralegals and pilots.

But while the article underlines the uncertainty of future labor markets and suggests more attention be paid to the looming revolution of the workplace, there is no mention of the vastly reduced need for importing workers, who are not needed now and even less so in coming years.

One analyst estimates that one in three jobs will be done by smart machines by 2025, only 11 years from now. A 2013 study from Oxford University researchers estimated that 45 percent of US jobs are vulnerable to computerization in the next 20 years.

So it doesn’t make sense to import an unemployable underclass of immigrants and illegal aliens from Mexico and Central America, which Washington is doing at an increasing rate. Many will turn to crime when jobs aren’t forthcoming.

A machine that administers sedatives recently began treating patients at a Seattle hospital. At a Silicon Valley hotel, a bellhop robot delivers items to people’s rooms. Last spring, a software algorithm wrote a breaking news article about an earthquake that The Los Angeles Times published.

Although fears that technology will displace jobs are at least as old as the Luddites, there are signs that this time may really be different. The technological breakthroughs of recent years — allowing machines to mimic the human mind — are enabling machines to do knowledge jobs and service jobs, in addition to factory and clerical work.

And over the same 15-year period that digital technology has inserted itself into nearly every aspect of life, the job market has fallen into a long malaise. Even with the economy’s recent improvement, the share of working-age adults who are working is substantially lower than a decade ago — and lower than any point in the 1990s.

Lawrence H. Summers, the former Treasury secretary, recently said that he no longer believed that automation would always create new jobs. “This isn’t some hypothetical future possibility,” he said. “This is something that’s emerging before us right now.”

Erik Brynjolfsson, an economist at M.I.T., said, “This is the biggest challenge of our society for the next decade.”

Mr. Brynjolfsson and other experts say they believe that society has a chance to meet the challenge in ways that will allow technology to be mostly a positive force. In addition to making some jobs obsolete, new technologies have also long complemented people’s skills and enabled them to be more productive — as the Internet and word processing have for office workers or robotic surgery has for surgeons.

“It is literally the story of the economic development of the world over the last 200 years,” said Marc Andreessen, a venture capitalist and an inventor of the web browser. “Just as most of us today have jobs that weren’t even invented 100 years ago, the same will be true 100 years from now.”

Yet there is deep uncertainty about how the pattern will play out now, as two trends are interacting. Artificial intelligence has become vastly more sophisticated in a short time, with machines now able to learn, not just follow programmed instructions, and to respond to human language and movement.

At the same time, the American work force has gained skills at a slower rate than in the past — and at a slower rate than in many other countries. Americans between the ages of 55 and 64 are among the most skilled in the world, according to a recent report from the Organization for Economic Cooperation and Development. Younger Americans are closer to average among the residents of rich countries, and below average by some measures.

Clearly, many workers feel threatened by technology. In a recent New York Times/CBS News/Kaiser Family Foundation poll of Americans between the ages of 25 and 54 who were not working, 37 percent of those who said they wanted a job said technology was a reason they did not have one. Even more — 46 percent — cited “lack of education or skills necessary for the jobs available.” END_OF_DOCUMENT_TOKEN_TO_BE_REPLACED