Robert Spencer has written numerous books about hostile Islam in addition to his blog JihadWatch.org, and while his scholarship is generally very informative, I’ve long thought he did not discuss the immigration angle enough. After all, how else does murderous Islamic jihad reach our shores other than by immigration?

So it was good to see him remark on that subject in a recent Ask Me Anything online session at Reddit.com:

Useful_Vidiots: What is the single greatest thing you would do to stop Islamic terrorism?

Robert Spencer: Ban immigration from Muslim countries. This is not in reality unconstitutional. The Constitution doesnt apply to non-citizens, and no one has some natural right to come to the US. Besides that, I would aggressively counter the guiding ideology of the jihadis which the US has NEVER yet done in any way. During the Cold War we had Radio Free Europe and the VOA beaming into Communist countries explaining why Communism was a failed system. Now we dont dare challenge the jihad ideology, because its religious. But what if, when we went into Iraq and Afghanistan, we had offered refuge to every woman beaten by her husband, and every secret ex-Muslim (secret because of Islams death penalty for apostasy), and every non-Muslim persecuted by Muslims, and every gay person in fear of being murdered, etc.? The outcome would have been very different.

Below, French soldiers guarded Notre Dame Cathedral where parishioners had to go through a bag check for Christmas services because of worsened terror attacks in France. 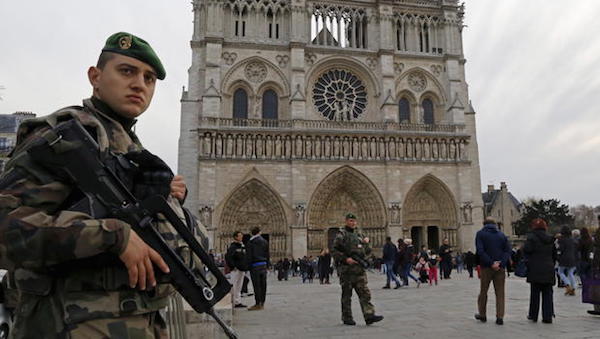 Spencer recently continued the immigration topic with a video and corresponding blog piece, observing the carnage that took place over the Christmas holidays in Europe.

Robert Spencer: This Christmas Was the Ghost of Christmases To Come, JihadWatch.org, December 29, 2016

Christmas took place this year amid heightened security all over Europe and North America. And this year’s tense and nervous Christmas is just the beginning: get used to it, because Christmas is going to be like this for many years to come.

The Mailonline reported that “the West has been put on increased terror alert over the festive period following the Berlin lorry tragedy. Security has been ramped up in major cities including, London, New York, Paris, Vienna and Dusseldorf, as fears grow of another ‘ISIS’ attack on the West. Tanks were seen in the streets of Budapest, Hungary, and soldiers were pictured at the Christmas markets in Antwerp, Belgium. The Metropolitan Police has said it is to review its plans for protecting public events over Christmas and New Year following the ‘awful incidents’ in Berlin and Ankara.”

The extra security was justified: not only did jihadis target the Christmas market in Berlin, but there were six other terror plots and attacks in the run-up to this Christmas day.

Why is this happening? Why are tanks in the streets of major cities, guarding Christmas markets? Why is the entire Western world on edge? Because European and North American authorities have admitted large numbers of Muslim migrants into their countries, among whom are unknowable numbers of jihad terrorists, and allowed Sharia enclaves to grow in which hatred of unbelievers and the necessity to wage war against and subjugate them is taught. Christmas is under siege because there are large numbers of Muslims in the West. The responsibility lies with those who admitted them without regard for Islam’s doctrines of religious warfare and supremacism.

In August 2014, Amel Shimoun Nona, the Chaldean Catholic Archbishop of Mosul, predicted that all this would happen. After Islamic jihadists decimated the Christian population of his area, Nona prophesied: “Our sufferings today,” he said, “are the prelude of those you, Europeans and Western Christians, will also suffer in the near future.” And so, as the few remaining Christians in the Middle East prepare to celebrate Christmas and hope that Muslims won’t murder them for doing so, that future is now.

Nona continued: “I lost my diocese. The physical setting of my apostolate has been occupied by Islamic radicals who want us converted or dead.” He explained that the West was making a grave error by assuming that Islam was a religion of peace that taught the equal dignity of all human beings:

Please, try to understand us. Your liberal and democratic principles are worth nothing here. You must consider again our reality in the Middle East, because you are welcoming in your countries an ever growing number of Muslims. Also you are in danger. You must take strong and courageous decisions, even at the cost of contradicting your principles. You think all men are equal, but that is not true: Islam does not say that all men are equal. Your values are not their values. If you do not understand this soon enough, you will become the victims of the enemy you have welcomed in your home.

You will become victims of the enemy you have welcomed in your home.

And now here we are. What will future Christmases in Europe look like, unless suicidal policies regarding Muslim migration are reversed? They will look like Christmases in Islamic lands, where Christians gather with the constant awareness that this could be the day that Islamic jihadis decide to punish them for the crime of being infidels. Muslims threw a grenade at a church in Mindanao, a Muslim-majority area of the Philippines, during Christmas eve mass yesterday, injuring sixteen people.

Could that happen here? The Islamic State (ISIS) hopes so; several days ago it published the names and addresses of thousands of churches in the United States, calling on Muslims to attack them. Surely these churches have nothing to worry about if they don’t have any clergy or parishioners who have drawn Muhammad, stood up for the freedom of speech, or otherwise provoked the poor dears and poked them in the eye, right? Surely the churches that have pursued “dialogue” with Muslims even at the cost of remaining silent about the Muslim persecution of Christians and abandoning those Christians to their fate have nothing to worry about, do they? The Islamic State will surely see how accommodating they have been and spare them, won’t it? Surely the Islamic State will go easy on the cowards and appeasers, no?

No. That list may not be acted upon this year, but the more Muslims enter the U.S., the more jihadis will be among them, and the more Christians will be under threat. For the sake of Christmas, then, Trump cannot come a moment too soon.