How did Reince Priebus keep his job as the Chairman of the Republican Party after the GOP lost a winnable election last November? It’s a question that I have. At least Mitt Romney has been mostly quiet since the devastating defeat.

But now Priebus is back, feigning leadership with a diversity-friendly to-do list that he thinks will make the public like the party better. He is doing the rounds of media appearances, talking up a new report, Growth & Opportunity Project, which purports to lay out a roadmap for Republican rebranding.

Immigration is a no-brainer: “ … We must embrace and champion comprehensive immigration reform. If we do not, our party’s appeal will continue to shrink to its core constituencies only.” Bush’s inroads with Hispanic voters were squandered by anti-immigration conservatives who blocked reforms during his presidency. Priebus is worried that immigration reform will stall again in Congress.

Priebus must not have examined election results very closely. In 2008, heartfelt amnesty enthusiast John McCain got a mere 31 percent of the Hispanic vote, while in 2012 pro-enforcement candidate Mitt Romney received 27 percent of latino votes, only 4 percent fewer. 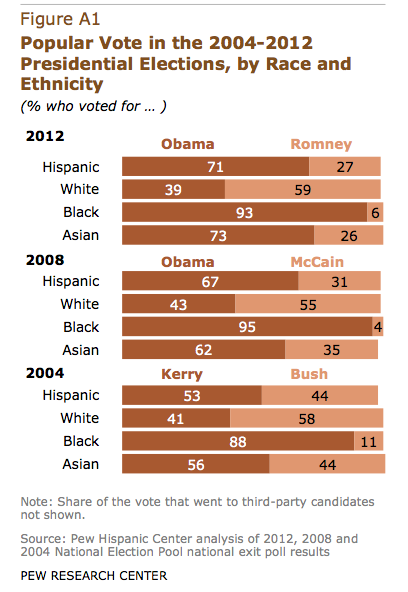 The more important fact about Hispanics is their cultural preference for big government, which lasts generations despite residing in America. The numbers are from Pew Hispanic’s 2012 research, Hispanics and Their Views of Identity:

The McCain failure should have proved once and for all that Republicans cannot win Hispanics with the promise of mass amnesty. But the big RNC brains have a religion-like belief in political diversity that clouds their view of actual facts. Hispanics see big government as positive and like getting free stuff, making them natural Democrats as a group.