In the Westlake area of Los Angeles, the local Hispanics rioted for a couple days recently after an illegal alien was shot and killed by a police officer when the Guatemalan lunged at the cops with a knife. For more background, see my earlier blog: Los Angeles Officials Coddle Rioting Foreigners.

Naturally, a journalistic followup seemed in order that would mosey around the neighborhood, with lots of sensitive observation of new residents struggling to achieve a better life, as well as appreciation for the local color.

What readers get is painfully upside-down in its gushing deference to illegal aliens and their problems created by further lawbreaking. To be fair, the reporter reflects in part the mood on the ground, where top cops and politicians pander at length to people who, by law, belong in another country.

The article begins with a misleading headline (”immigrants” rather than ”illegals”) and launches full throttle into a cheerful embrace of diversity, celebrating the colorful noisy smelly elements of a non-American street scene, fueled by unlicensed illegal vendors. The reporter then goes on to describe a community filled with dysfunction, poverty and crime – which is it?

This central Los Angeles neighborhood could almost be plucked right out of Guatemala City.

This week, the bustling community turned into a hotbed of unrest after a police officer shot and killed a Guatemalan day laborer who allegedly lunged at him with a knife. The incident Sunday sparked three days of protests by people who felt that killing Manuel Jaminez, a 37-year-old illegal immigrant, was an unfair and unnecessary use of police force.

The demonstrations surprised officials, who blamed the blowback on outsiders who had come to the area to stir up trouble. A visit to the neighborhood of grimy tenements with curlicued cornices and portals that belie a more elegant past reveals a social tapestry fraying from increasingly hardscrabble living and widespread frustration.

”Life is very hard here,” said Ricardo Fernandez, a retired Nicaraguan truck driver. ”I tell people not to come, it’s not as good as before. But people still come.”

The neighborhood has long been a first stop for new arrivals who have made the risky journey to ”el Norte.” More than two-thirds of residents are foreign-born, almost three-quarters are Hispanic, almost half live in poverty.

Drawn to a neighborhood with flavors of home, about 118,000 residents jam the area’s 2.7 square miles, making it one of the most crowded districts in Los Angeles.

But they often find it fails to live up to the starry-eyed stories told by friends and relatives eager to appear big shots with their U.S. success.

Jobs are few and far between, rents are high, and unfamiliar laws are stringently enforced. Crime is also high, with much of it related to the neighborhood’s homegrown Mara Salvatrucha or MS-13, a gang formed by Salvadoran immigrants in the 1980s that has morphed into one of the most vicious in the nation.

Particularly vulnerable are campesinos, subsistence farmers from the indigenous communities of rural Mexico and Guatemala who often are far less prepared to cope than other immigrants.

Many have only a few years of formal schooling and may barely be able to read and write. Some speak little Spanish, having grown up in isolated areas where native indigenous languages are mainly spoken.

Jaminez was a Quiche, one of Guatemala’s largest indigenous groups, and barely spoke Spanish.

”They’re the ones I see coming now. They’re not poor, they’re destitute,” said Carolina Sosa, a Guatemalan pastor. ”Before it was the lower middle class fleeing the guerrillas. Now, they’re coming because they don’t have food.”

The recession coupled with the backlash against immigrants has toughened life for newcomers.

Apartments are often crowded with several families sharing rent. To eke out a living, many have taken to peddling everything from bootleg DVDs to bacon-wrapped sausages, turning the sidewalks into a chaotic flea market on evenings and weekends.

”There are a lot more people in the street selling,” said Andres Morales, a Cuban retiree. ”It gets so you can’t walk on the sidewalk, but they have nothing else.”

In Latin American countries, street peddling is a ubiquitous and time-honored way of getting by when jobs are few and government assistance is scarce. Immigrants have a hard time understanding why it is illegal here and they resent crackdowns by police who give out $250 tickets and sometimes confiscate their goods.

”I’m making an honest living, but the police come and ticket us,” complained Jose Venegas, a Mexican ice cream seller who makes $12 to $15 a day. ”I have two appointments in court for two tickets. I don’t know what I’m going to do. I don’t have the money to pay the fines. I’m going to go to jail.”

The stress of trying to make ends meet plus social and emotional isolation leads some to seek refuge in alcohol. Jaminez had been drinking when he allegedly menaced two women and then police officers with a knife.

Residents said public drinking is out of control.

When radio guys John and Ken reported this story last week, John expounded at length on the disgusting filth and third-worldiness of the neighborhood, and how he and his wife feared driving through it.

Then a listener called in and described how at a local market, an employee daily goes through the parking lot picking up the dirty diapers thrown on the ground by diverse shoppers – placing the foul items into a shopping cart, dumping the diapers and then replaced the cart among the others for public use.

Below, residents of Los Angeles protested what they consider police brutality. 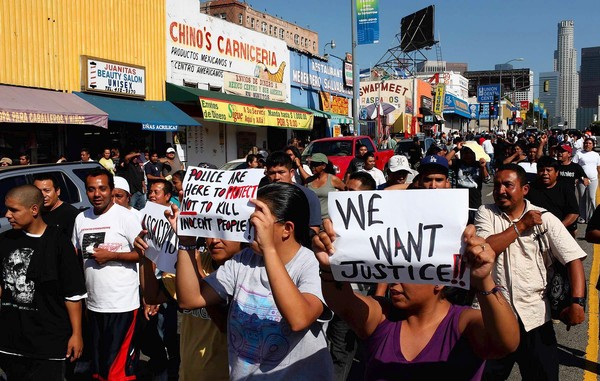