I should have gotten around to posting on this before, but here, via Steve Hsu, is the 2009 paper: The impact of smart fractions, cognitive ability of politicians and average competences of peoples on social developmentby Heiner Rindermann, Michael Sailer (no known relation), and James Thompson.

To test La Griffe du Lion's "smart fraction" theory, they first synthesize a large number of results from international school achievement tests (PISA, TIMMS, and PIRLS), then convert them to an IQ-like scale where Britain has a mean of 100 and the standard deviation is 15. (They don't use Lynn and Vanhanen's database of IQ tests, but Rindermann previously showed strong correlations between L & V's numbers and performance on international school achievement tests.)

Since these tests report performance at the 5th and 95th percentiles, we can see not only the means but also the performance at the top and bottom by countries. Here, for example, is the last page of their results, Singapore to Yugoslavia/Serbia. 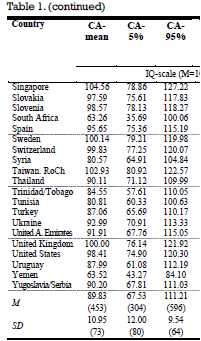 Singapore, an expensive, well-administered city-state, has the highest school achievement test scores at the 95th percentile.

Some astonishing results are observable like the high level of Kazakhstan (6., IQ 122) and the comparatively low for Israel (31., IQ 118, mean 93). For Kazakhstan we have only results from TIMSS 2007 (4th grade); Mullis et al. (2008, p. 34) describe sample anomalies, a correction would be necessary. Israel has participated in several studies, compared to older studies and Jews in the Western World the results are deteriorating (e.g. Lynn & Longley, 2006). Most probably multiple reasons are responsible and not only the 20% fraction of Arabs (a thorough analysis would be necessary). There are also characteristic differences between mean, upper and lower levels. For instance between Canada and USA there is no difference in the upper level (IQ 120 and 120), but in the lower level (IQ 80 and 75). The past history of slavery and a different immigration policy (or different success of migration policies and geographical distance to societies with lower mean abilities) may be reflected into this difference. A similar pattern could be found for Finland and Germany: The difference in the upper level is only 1.20 IQ-points (IQ 121 and 120), but at the lower level 9.60 IQ-points (IQ 85 and 76). Most likely different immigration histories are reflected here, furthermore differences in educational policy (age of tracking, in Germany between age 10 and 12, in Finland at age 16). Early tracking increases ability variance. Using regression analysis (as predictors mean and lower level) the largest residual (standing for difference between upper level and the rest) is found in South Africa (with its heterogeneous population of European, Asian and African descent), inverted the largest residual (standing for difference between lower level and the rest) is found in Belgium (probably a result of immigration and educational policy).