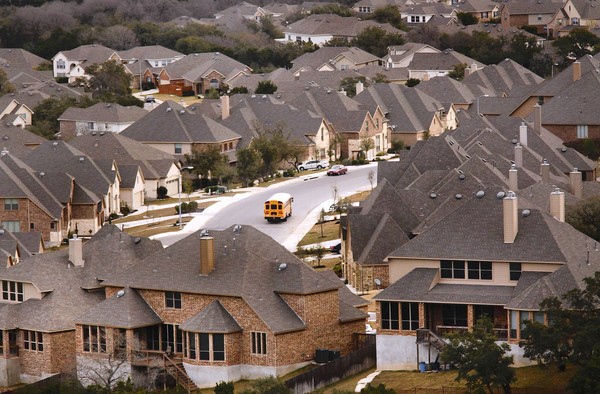 La Times has a typically Mexo-friendly report about wealthy Mexicans relocated to the San Antonio area, where they gather in deluxe communities designed with safety in mind (pictured). And these are the 1% ultra rich, with private jets, who generally like to flaunt their wealth when they feel comfortable in doing so.

There are several mentions of kidnappings as being a motivator for the move. Families reasonably fear their kids being snatched for ransom, a crime which has flourished in lawless Mexico. But wherever Mexicans reside in large numbers, the Mexican way of crime follows.

For example, numerous Mexicans have taken up residence in San Diego in search of improved safety, and kidnapping for ransom is far more frequent there as a result.

The Mexicans who have relocated (legally! via business-related means) to south Texas may fear the drug cartels, yet a number are connected with Mexican organized crime. So some of the Porsches are owned by cartel honchos.

Interestingly, the Mexicans in San Antonio are compared with Cubans who turned Miami into a foreign enclave of diversity and crime. The rich Mexicans say they want to improve the image of “the immigrant” in the United States — good luck with that!

Settling in San Antonio with private jets and Porsches, their influence has been compared to that of well-heeled Cubans who took refuge in Miami decades ago.

SAN ANTONIO — The Mexican businessmen in Rolexes and Burberry ties meet on the north side of town, at Cielito Lindo Restaurant, or at new neighboring country clubs. Their wives frequent Neiman Marcus, Tiffany’s and Brooks Brothers at the nearby mall. Their children park Porsches with Mexican license plates in the student lots at Reagan High School.

They are part of a wave of legal Mexican immigrants who have been overlooked in the national debate over how to deal with their largely impoverished illegal compatriots. Propelled north by drug cartel violence, they paid thousands of dollars to hire attorneys and obtain investors’ visas for themselves and their families (including maids). They have regrouped in gated developments in several Texas cities, where their growing influence has been compared to the impact of well-heeled Cuban refugees who arrived in Miami decades ago.

Nowhere is the evidence more striking than in San Antonio, Texas’ second-largest city and a short private-jet hop from Monterrey, Mexico, where many of the new immigrants built their wealth. They have poured into developments with names like the Dominion, Stone Oak and Sonterra that were cut into the rocky hills and oak groves north of the Loop 1604 highway that rings the city.

“I can see it transitioning,” said Sarabia, 45, who lived for a time in Mexico City. “This has always been a bicultural city. Parts of it have now become a new Mexico.”

There’s Lorena Canales, 40, who moved from Monterrey with her two youngest children two and a half years ago to start a bilingual day care after witnessing a gun battle outside her local Wal-Mart.

Uriel Arnaiz, 40, relocated with his wife and 3-year-old son from Mexico City four years ago to open a high-end tequila import business after some of his son’s friends were kidnapped.

José Ramos, 55, moved two years ago from Monterrey to open a restaurant, Vida Mia, after a relative was kidnapped and killed.

It’s not clear whether new immigration policies being contemplated in Washington would affect this group of wealthy immigrants, who skip long immigration lines by hiring attorneys in Mexico to apply for business-related visas at U.S. consulates.

Most had to prove they were either employed by a multinational company or had a valid business plan and enough money to start their own. Some had to show American investments worth hundreds of thousands of dollars. Many moved in a matter of weeks, though some said the process had become more difficult in recent years, with tougher screening by U.S. consulates.

Costs vary depending on the type of visa. In many cases, it is cheaper than what a smuggler would charge for an illegal crossing. Attorney fees can range from $1,500 to $6,500, compared with coyote payments of $6,000 or more.

Arnaiz’s initial visa allowed him to stay in the U.S. for up to a year. He was able to renew the visa, which is required every two years for up to seven years if he wants to stay. His wife and son were eligible for visas for the same time period (children under age 21 are eligible). While staying in the U.S. on those visas, they were allowed to pursue permanent residency, or green cards, which they got in recent months.

“There’s a lot of requirements,” Arnaiz said. “You need to have a real, sustainable project.

The visa for professions listed in the North American Free Trade Agreement is relatively quick and cheap to obtain, some said, with attorney fees ranging from $1,500 to $3,000.

During the last decade, the number of such visas issued to Mexicans annually skyrocketed from 686 to 7,601, according to the State Department.

The newcomers — nicknamed “migrantes fresas,” or rich migrants — are conspicuous even in this largely Latino city. Sociologists compare the “Mexodus” of professionals to the wave of exiles who fled to Texas after the Mexican Revolution in 1910, or wealthy Cubans who decamped to South Florida after the revolution in 1959.

Former San Antonio Mayor and Secretary of Housing and Urban Development Henry Cisneros, whose grandfather was exiled to San Antonio during the Mexican Revolution, calls them a “new diaspora with the potential to rival the impact Cubans had on Miami.”

Harriett Romo, a sociology professor and director of the Mexico Center at the University of Texas at San Antonio, has been studying a dozen Mexican families who immigrated through investor visas.

“What we’re seeing is that they move into kind of a new Mexican enclave — it’s not a barrio like you would see on the east side of L.A. or west side of San Antonio. It’s an upscale Mexican neighborhood with parties at the country club,” she said.

Romo found that the new residents don’t mix much with lower-income Mexican immigrants or with Mexican Americans, the Tejanos who helped build San Antonio. They are focused instead on “changing the image of the immigrant,” she said. “They see themselves as having a very different experience because they come with official visas and more resources.”

Writer Sandra Cisneros, a Chicago native who has lived in San Antonio for almost 30 years, says the flow of wealthy immigrants “constantly refreshing the ties” to Mexico has changed the character of the city, which long had the feel of a small town and now has a population of about 1.4 million.

San Antonio Mayor Julian Castro, a Mexican American and a rising star in the Democratic Party who has traveled south of the border to recruit businesses, says he hopes the newcomers stay.

“My hope is that they are planting firm roots and will become American citizens and fully participate in the community,” he said.

The number of international passengers traveling to San Antonio International Airport increased 132% last year from the year before, and the airport added two new carriers to Mexico.

Flight schools are struggling to meet the demand for pilots to fly Mexicans whose private jets fill the runways of southern Texas.

Pepe Hurtado says many of the clients at his San Antonio luxury car business store their cars in hangars at the airport when they jet back to Mexico.

“You can definitely see it and feel it. There are times I go to HEB and I only hear Spanish,” said Sylvia Orduna, 33, who works at a high-end cosmetics company that has seen steady business from new Mexican residents.

Pamela Gardner, 61, has lived at the Sonterra housing development for a decade and has noticed many new Mexican neighbors in the last few years.

“It does put a strain on the schools,” Gardner said, noting that some schools have been “capped,” turning away new students. She said her daughter, a vice principal at a local school, had to add classes in English as a second language because so many students speak only Spanish.

“You feel bad for the husbands because they’re down there during the week and they come on the weekends and have to go back. It’s sad,” she said of those who commute to work in Mexico.

Newcomers settle in Sonterrey because they hear from friends that the local public schools are highly rated, they have business connections in the area and see billboards in Mexico advertising the gated communities. Some have difficulty adjusting, particularly wives and children accustomed to cooks and chauffeurs.

“We are used to being served and surrounded by help,” said Arnaiz, whose wife traded two live-in maids for a Mexican American housekeeper who comes twice a week.

“That’s why you see a lot of Mexican nationals here with their maids,” he said. “Being here without domestic help, the inside dynamic of the family is different.”

Canales, the mother from Monterrey, says her children had to adjust to life without a maid and their father during the week. But she says the trade-off is they can bicycle and hear other kids playing outside — a joyful noise they had not heard for years in Monterrey, where they lived behind high walls and barred windows.

“We had neighbors whose children were kidnapped and never came back,” she said.

But in Sonterrey, as in Mexico, gates don’t guarantee protection from the cartels.

Last year, one of Arnaiz’s neighbors, fellow newcomer Fernando Alejandro Cano Martinez, was charged with laundering money for the Gulf cartel. Two brothers from Guadalajara were charged with using north side homes and businesses as a front for cartel money, which financed their Learjet, an Italian restaurant and other investments.

It’s not clear how permanent the new enclave and its problems are. Many residents are watching to see if the newly elected Mexican president can curb cartel violence enough for them to feel safe moving back to Mexico.

Ramos, the restaurant owner, is among those who have debated returning to Mexico. His daughter Mayela at first struggled with the transition. But when he decided to stay, she agreed.

“All my friends ask me, ‘When are you coming back?’” Mayela Ramos, 26, said during the lunchtime rush at the restaurant, as Mexican ladies with designer handbags nibbled fideo, a Mexican pasta, and chatted in Spanish. “But our life is here now.”