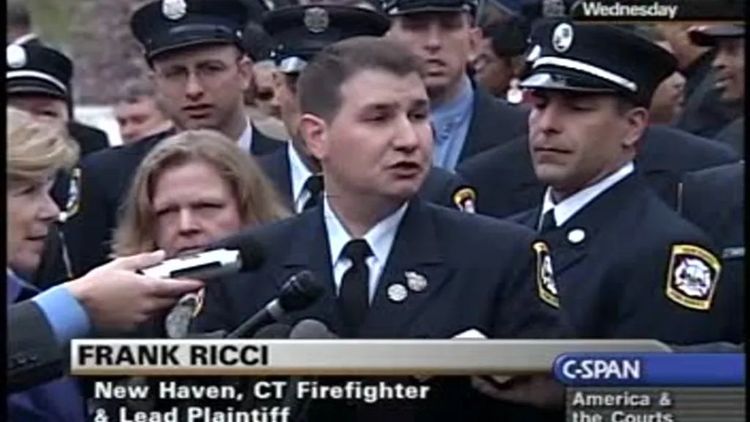 Sure enough, last week, just as New Haven prepared to promote a group consisting almost entirely of white fire captains and lieutenants based on the exam results, a black New Haven firefighter, Michael Briscoe, filed a disparate-impact lawsuit against the city. Like Frank Ricci, Briscoe is a sympathetic plaintiff. He received the highest score of any candidate on the oral portion of the lieutenant's promotion exam. But he isn't eligible for promotion because the city based 60 percent of each candidate's score on the written exam. On this part of the test, Briscoe–like most black candidates for promotion–did comparatively badly. ...

UPDATED: Fortunately, the test scores were posted by Adversity.net, and we can figure out who Briscoe is pretty easily.

Actually, Briscoe did very badly on the written test in any sense. Although he scored a 92.08 on the oral test, he only scored a 59 on the blind-graded written test, putting him 66th out of the 77 test-takers on that test. He scored 13th out of 19 blacks on the written-exam. Overall, counting both the oral and written exams, Briscoe finished 24th, with five blacks ahead of him. Why is Briscoe more deserving than the five blacks who did better under the rules?

Briscoe had the largest divergence in scores between the two tests of any of the 77 test-takers, implying his high score on the oral part could well be a fluke. Oral tests are more likely to produce unreliable scores because the sample size of questions per hour of testing is smaller due to the lower bandwidth of oral vs. written communication.

Or, perhaps Briscoe is a smooth talker who can impress outsiders in the short run, but lacks the job knowledge to maintain the confidence of underlings in even the medium run.

This is a classic example of why Disparate Impact is worse than plain old racial quotas. There are five black guys who are better under the rules than Briscoe, but now we're supposed to rip up the rules and use a different system that will promote Briscoe ahead of the five more competent blacks, as well as push a lot of less qualified whites and Hispanics ahead of more qualified whites and Hispanics.

Moreover, if you changed the weighting on the Lieutenant's test to favor the Oral component over the Written component, that would have Disparate Impact on Hispanics!

Briscoe's claim is a perfect example. Why didn't black candidates do as well as whites on the written exam? Black firefighters argue that because whites are more likely to come from families where firefighting is a legacy (for instance, one New Haven captain's father and grandfather both served as fire chief in New Haven), they are more likely to get help from a network of friends and relatives in studying for the written exam. Few blacks have such family connections–in large part because blacks were deliberately shut out of firefighting jobs until the 1970s, when black firefighters won discrimination suits in New Haven and in many other cities nationwide. ... So heavy reliance on a written exam, if it gives an advantage to legacy candidates, could perpetuate the evils of past discrimination.

Kind of like how Slate's other Ricci expert, Emily Bazelon got her job writing about the law by being the second cousin of Betty Friedan and the granddaughter of the most powerful non-Supreme Court judge in America, David Bazelon. Except she didn't have to pass a written exam to get the cushy Truman Capote Fellowship in Creative Writing and the Law at New Haven's Yale Law School.

That violates Title VII, unless the exam is job related and there are no less discriminatory alternatives. New Haven's written exam may be as good as any written exam could have been: The Supreme Court in its ruling in favor of the white firefighters in Ricci pointed out that the city's written test was carefully developed by a professional company to be job-related and to avoid racial disparities. But Briscoe argues that the written exam did not, in fact, test for the skills that fire captains and lieutenants need on the ground; instead, it rewarded rote memorization. As for alternatives, Briscoe says that the city could have relied more heavily on the oral exam, which required candidates to respond to real-life firefighting and training scenarios. Neither the city nor the company that designed the exam defended making it worth 60 percent of the promotion score. Briscoe also points out that New Haven could have used an assessment-center model, which tests candidates through simulations of real-life job challenges. Many other cities use assessment centers successfully.

The key difference between the oral and written test is that the written test was blind-graded while the grading of the oral test was racially rigged from the outset by making almost two-thirds of the judges minorities, which is highly unrepresentative of the distribution of senior firefighting leadership expertise.

The whole point of civil service examinations is to eliminate favoritism, which is why the union insisted on a 60% weighting in favor of the blind-graded test over the easily-rigged oral test.

I would strongly recommend that the Supreme Court fast-track Briscoe's case. I'd look forward to reading Justice Alito's opinion.