By Tim Cocks and Edward McAllister

DAKAR/AGADEZ (Reuters) – When German Chancellor Angela Merkel toured three African nations this week for talks on curbing migration to Europe, the leader of the world’s poorest country, Niger, suggested it would take a “Marshall Plan” of massive aid to stop people coming.

Merkel politely declined the request, expressing concern about how well the aid would be spent and noting that, at a summit in Malta last year, the European Union had already earmarked 1.8 billion euros for a trust fund to train and resettle migrants.

But Niger’s President Mahatma Issoufou also proposed something perhaps more significant, in the long run, than a development package – bringing Niger’s population growth down from 3.9 percent, the highest in the world.

Though he gave no details on how this could be achieved, demography clearly holds the key both to Europe’s migration crisis and to the African poverty feeding it. As long as population growth in African countries outstrips their ability to educate, house and employ their citizens, large numbers of people will continue to brave the deserts and seas to escape.

“You can’t resolve this by just paying money,” said Owoeye Olumide, a demographer at Bowen university in southwest Nigeria, one of the world’s most densely populated regions.

“There are going to be too many people … the development you need will not be possible. You have to lower fertility rates and bring down population (by educating and empowering women).”

Niger, a vast, largely desert nation to the north of Nigeria, presents the starkest example of Africa’s challenges.

With an average of 7.6 children born to each woman, its population is projected to more than triple to 72 million by 2050, from about 20 million now, according to the latest U.N. figures. 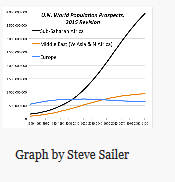 By then, Africa will have more than doubled its population to 2.4 billion, the United Nations says.

… Ironically, Niger’s location in the largely unpoliced sands of the Sahara also makes it a draw for migrants. They come from across Africa hoping to be smuggled to a better life in Libya or Algeria — or over the Mediterranean to Europe.

In doing so, the migrants bring cash to Niger, a country that has repeatedly proved unable to feed itself. …

The International Organisation for Migration (IOM) expects migration through the Agadez region this year to reach 300,000, more than twice the 120,000 it estimates came through in 2015.

EU officials hope to deter migrants like Diallo by making clear that life as an illegal immigrant in Europe is hardly better than staying in Africa. But that message has yet to filter down. …

In 2013, Niger’s corruption investigators did a study on smuggling that was never published, but which Reuters has seen. It said Niger’s security forces make almost half a million CFA francs ($850) from every round trip by a smuggling truck — just from migrants alone, not including payoffs from the gangs.

The government did not respond to a request for comment.

Agadez, a desolate town of sandy streets and mud houses, is booming….

“What we can’t do right now is offer real alternatives,” he said, adding that “a mixture of development aid and job creation is the only way forward”.

Germany could pay natives in Niger to serve as border guards to migrants from the south from transiting through Niger. Giving them incentives based on falling numbers of migrants reaching Europe. Heck, Germany could be doing the same with hiring Greeks in Greece to keep out Middle Easterners.

According to a theory popular with investment bankers and management consultants, Africa’s population woes will solve themselves. Africa, they say, will reap a “demographic dividend” as its bulging youth population drives innovation and consumer markets — as happened to Asia in decades past.

Rich white men have been encouraging the African population bomb because they think it’s a way for them to get even richer.

The latest commodity crash highlighted reasons for being less optimistic: Africa remains over-dependent on raw materials and has failed to create the manufacturing or service jobs that helped drive Asia forwards.

Yet even if Africa is ‘rising’, says Renaissance Capital’s Charles Robertson, himself an optimist, migration will remain “pretty unstoppable”.

Any bright youth who chooses to stay in most African countries has a good chance of doubling his wealth over 10 years, he says, but that still presents a dilemma:

“You can stay where you are and go back to where Germany was in 1920 or you can leapfrog 90 years of development and have a better standard of living now,” he said. “That isn’t going to change for half a century.”

(Additional reporting by Andreas Rinke in Niamey, David Lewis in Nairobi and Alastair MacDonald in Brussels; Editing by Gareth Jones)

Funny thing is about Unstoppable Africans, I was looking at a map and, you wouldn’t believe it, but there’s actually a formidable natural barrier between Africa and Europe called the Mediterranean Sea. I have this crazy idea that if European navies stopped towing illegal alien boats across the Mediterranean to Europe and instead towed them back to Africa, that might make the Africans more stoppable. It’s so nuts it just might work.