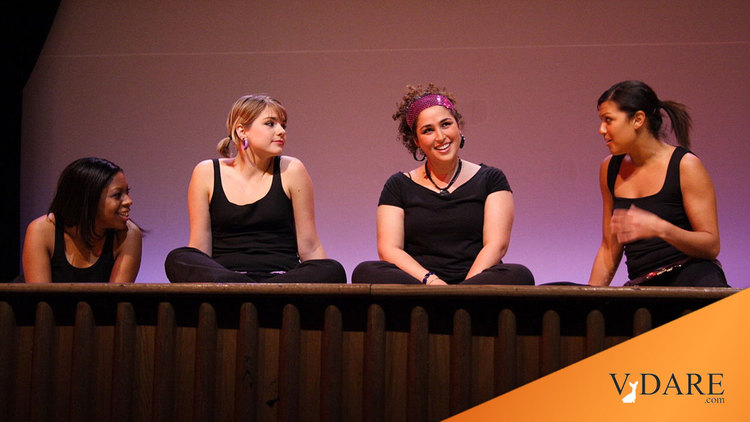 From the Cornell U. Daily Sun:

Curtains Close on The Vagina Monologues
By Sophie Arzumanov

The student actors of the play The Vagina Monologues unknowingly took their final bows last winter. The past sponsor of the popular show, the Women’s Resource Center, has announced that due to recent changes in its mission statement—the group was rebranded the Gender Justice Advocacy Coalition this year—it will no longer support the play.

The show is a collection of interviews-turned-narratives from people of all ages and backgrounds about their relationships and experiences with their vaginas.

“The limitations of the script, namely that it equates having a vagina with female identity, and the requirement by Eve Ensler that it remain unchanged, leaves us with an incomplete play that doesn’t honor the experiences of trans, non-binary and gender non-conforming people. It is thus hurtful, harmful and exclusionary to folks with these identities,” said Shura Gat, interim director of the Women’s Resource Center and advisor to GJAC.

… The episodic play has been performed annually for the past 21 years by a large student cast in Bailey Hall. …

Aboaf talked further about the impact that the monologues have on the Cornell community.

“There are lots of people on this campus who are uncomfortable with their vaginas, gender identity aside. It’s still beneficial to people,“ she said. …

Lakhani also noted that in her forward for last February’s play, “we specifically mentioned that this play is inclusive of people who have vaginas, who don’t have vaginas, of people of all sexualities and genders.”

“My entire message was about inclusivity. If you don’t have a vagina, you’re still a part of this play,” said Lakhani.