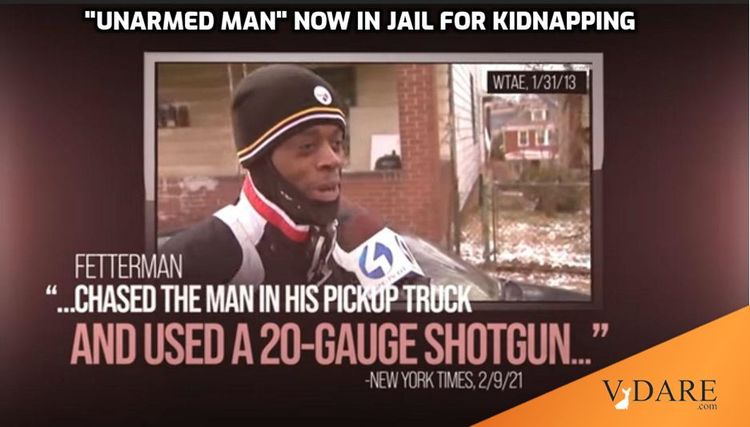 Democracy is nothing more than a racial headcount in a multiracial society, right?

We now live in a nation where daring to offend a black criminal is a greater crime for a white person than the black person committing the individual act of lawlessness. And the Republican Party is running on this concept.

Oz backers launch ads attacking Fetterman for pulling gun on Black jogger in 2013: Pennsylvania Democrats were worried the incident, which Fetterman has acknowledged as a mistake, could be used to try to suppress Black voters., by  Marc Caputo, NBC News, September 6, 2022

During Pennsylvania’s Senate primary, Black Democrats worried that the GOP would target voters with ads about the time Democrat John Fetterman pulled a gun on a Black jogger he wrongly suspected of a crime.

Now it’s on the air.

A political committee backing Fetterman’s opponent in the general election, Republican Mehmet Oz, is launching a 30-second TV ad about the incident that started airing Tuesday on networks that have solid African American viewership, such as Black Entertainment Television, the Oprah Winfrey Network, MSNBC and ESPN, the group, American Leadership Action, said by email.

The committee also has a companion 15-second digital ad designed to reach Black voters on their smartphones and social media feeds.

The $500,000 ad campaign comes as Oz, the celebrity TV doctor, has struggled to gain traction since his bruising May 17 primary. At the same time, Fetterman, Pennsylvania’s lieutenant governor, easily bested his opponents — even though he had just suffered a life-threatening stroke from which he’s still recovering.

Fetterman leads in nearly every poll, and by double digits in some surveys, prompting Republicans to train their fire on him to keep Democrats from flipping the Senate seat that Republican Pat Toomey is giving up.

The incident happened nine years ago when Fetterman was mayor of the Pittsburgh-area town of Braddock. He said he heard what he thought was gunfire, saw a man running away, chased him down with his shotgun and detained him until police arrived. The jogger, Chris Miyares, was found at the time to have committed no crime. He is now incarcerated for an unrelated crime [Multiple unrelated crimes, according to the New York Times: ”kidnapping for ransom, making terroristic threats and reckless endangerment”] and he recently told The Philadelphia Inquirer that he both forgives and supports Fetterman.

Fetterman has acknowledged he made a mistake, but he hasn’t offered a full-throated apology, concerning grassroots activists like the Rev. Mark Kelly Tyler, a top Philadelphia Democratic organizer who helped turn out Black voters in big numbers to aid President Joe Biden 2020 victory in the state.

“I expected this ad as sure as the sun rises in the east and sets in the west,” said Tyler, who predicted this spring that Republicans would weaponize the issue against Fetterman to keep Black voters at home.

About 11% of the state’s voters are Black. To win in the evenly divided swing state, Democrats often rely on maximizing their turnout, especially in Philadelphia and Pittsburgh.

A recent poll from Franklin & Marshall College suggested that while Fetterman led Oz by as much as 13 percentage points overall, the percentage of nonwhite voters who had no preference was double that of white voters — a sign of a lack of intensity that could spell trouble for Fetterman, said the college’s pollster, Berwood Yost.

It’s as if the entire nation has taken a knee to Black Lives Matter, forever sacrificing all morality to black criminals who are disaffected by white people daring to uphold the rule of law.

The mass-psychosis dominating life in Black-Run America (BRA) mandates we put the interests of black criminals ahead of those who dare abide by the laws governing polite society.

In so doing, we sacrifice the polite society so black criminality can proliferate.