The Republican from northeastern California verbally socked the weaselly Mexican for arrogantly lecturing the American Congress on race and immigration.

Rep. McClintock quoted Teddy Roosevelt and then went on to explain the importance of assimilation.

A century ago President Teddy Roosevelt put it this way.  He said:

That is how we have built one great nation from the people of all the nations of the world.

The largest group of immigrants now comes from Mexico.  A recent RAND study discovered that during most of the 20th Century, while our immigration laws were actually enforced, assimilation worked and made possible the swift attainment of the American dream for millions of immigrants seeking to escape conditions in Mexico.

That is the broader meaning of our nation’s motto, “E Pluribus Unum” – from many people, one people, the American people.

But there is now an element in our political structure that seeks to undermine that concept of “E Pluribus Unum.”  It seeks to hyphenate Americans, to develop linguistic divisions, to assign rights and preferences based on race and ethnicity, and to elevate devotion to foreign ideologies and traditions, while at the same time denigrating American culture, American values and American founding principles.

In order to do so, they know that they have to stop the process of assimilation.  In order to do that, they must undermine our immigration laws.

It is an outrage that a foreign head of state would appear in this chamber and actively seek to do so.  And it is a disgrace that he would be cheered on from the left wing of the White House and by many Democrats in this Congress.

Arizona has not adopted a new immigration law.  All it has done is to enforce existing law that President Obama refuses to enforce.  It is hardly a radical policy to suggest that if an officer on a routine traffic stop encounters a driver with no driver’s license, no passport, and who doesn’t speak English, that maybe that individual might be here illegally.

And to those who say we must reform our immigration laws – I reply that we don’t need to reform them – we need to enforce them.  Just as every other government does.  Just as Mexico does.

Here’s a video of the speech from the floor of Congress: 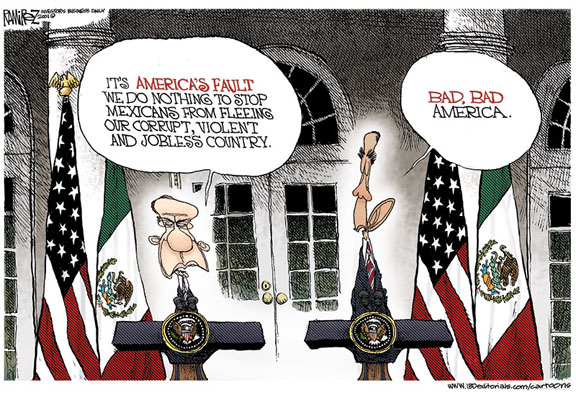