It’s deeply troubling to see a formerly dependable sovereignty defender like Congressman Ted Poe go over to the dark side of amnesty evil. Apparently the despicable flip-flop is based upon the increased Hispanicization of his district — so much for conservative principles of law and borders when re-election is threatened.

As a result of his weakened resolve, business interests are turning the screws more intently, complaining to him that there isn’t anyone to do the work, even though more than 20 million Americans can’t find jobs. (Naturally, nobody suggests that a living wage might entice citizens to take these mysterious unfilled jobs.)

Below, Ted Poe visits the border, which he used to care about enforcing. 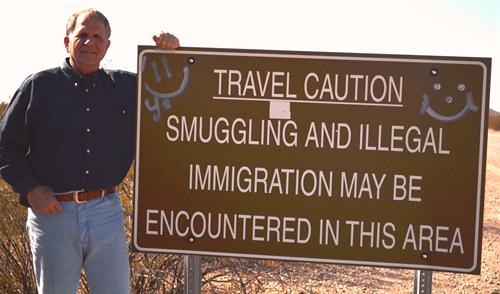 Not long ago, Poe authored legislation that would have helped protect public safety by pressing harder on Washington to deport foreign criminals that their home countries don’t want back. He was a real leader in pointing out the crimes that could have been prevented by the government deporting dangerous criminals rather than releasing them into American communities, like the convicted child predator Shafiqul Islam who was not deported to Bangladesh but remained to murder 73-year-old grandmother Lois Decker. He spoke from the House floor about the murder of Arizona rancher Rob Krenz by an illegal alien, calling the border a war zone.

So it is a real loss to America for him to embrace anarchy.

To be clear, Ted Poe supports legalization for the millions here unlawfully which he says is not amnesty because the lawbreakers wouldn’t get citizenship. Of course, the millions of foreigners don’t come so they can vote in US elections, but to take American jobs freely, and legalization gives them that privilege.

For that reason: Legalization Is Amnesty.

It’s sad to hear Congressman Poe parrot the silly talking points of the left of how the immigration system is broken, when there is nothing wrong beyond the lack of political will to enforce existing laws.

If Texas Representative Ted Poe was looking for reassurance that backing an overhaul of U.S. immigration laws won’t be political suicide for conservatives like him, he may have found it this week at a seafood restaurant on the outskirts of Houston.

During a roundtable discussion, several business executives told the five-term Republican that they can’t find enough Americans willing to cook fajitas, repair sidewalks and perform other types of unglamorous work that keeps the fourth-largest U.S. city humming. A more robust guest-worker program would help, they said.

Poe told the executives he was working on a bill to tackle the problem and assured them that his fellow Republicans would help overhaul the U.S. immigration system in the coming months.

“Just doing nothing is a vote for the status quo, which is broken,” Poe said of an immigration system that has struggled to deal with the estimated 11 million undocumented residents in the United States.

As lawmakers return to their home districts in the final weeks of summer, hundreds of U.S. businesses have quietly mobilized to persuade Republicans such as Poe that an immigration overhaul is broadly supported by their constituents, even if some conservative activists loudly object.

The low-key strategy by businesses, along with a decision by several conservative lawmakers to spend the month campaigning against President Barack Obama’s healthcare overhaul, appears to have lowered the temperature of the immigration debate.

Public “town hall” meetings held by members of Congress this month generally have not disintegrated into the raucous, racially tinged sessions on immigration that some had feared.

As a result, many involved in the effort are cautiously optimistic that one of their top priorities of the past decade could become a reality sometime in the next year and a half – even though huge obstacles remain in the Republican-controlled House of Representatives.

“We’re confident that this is going to get done sooner rather than later,” said Glenn Hamer, president of the Arizona Chamber of Business and Industry.

Immigration reform has long been a top priority for business groups such as the U.S. Chamber of Commerce, which say that current laws and regulations make it too difficult to find workers they can’t recruit at home and expose businesses to a tangle of conflicting labor regulations.

Business groups mobilized an army of lobbyists to push for passage of a sweeping immigration bill by the Democrat-controlled Senate in June. The bill – backed by 14 of the Senate’s 46 Republicans and all 52 Democrats – included new visa programs for foreign workers, additional requirements for employers to verify workers’ legal status, billions of dollars for extra security on the nation’s borders, and a 10-year path to U.S. citizenship for undocumented workers.

But the dynamics on immigration are different in the House, where many lawmakers represent uniformly conservative districts that give them little incentive to compromise.

House Speaker John Boehner says his chamber won’t even vote on the Senate bill. Instead, Republicans are expected to advance a series of bills that tackle the issue in pieces.

A path to citizenship is a non-starter for most of the 233 Republicans in the 435-seat House, though a few – including Florida Representative Daniel Webster and Illinois colleague Aaron Schock – have come out in support of the idea in recent weeks. The lobbying by businesses and other groups this summer has focused on urging House conservatives to pass a bill of their own that could emerge as the basis for compromise talks with the Senate.

Many Republicans are warming to a measure that would provide undocumented workers with some type of legal residency status, said Tamar Jacoby, president of ImmigrationWorks USA, a business group that organized the Poe roundtable. Those workers then could apply for citizenship through other means, she said.

“Can Republicans get to that path to legal status, and can Democrats accept that? That would be the makings of a sweet spot,” Jacoby said.

The debate over immigration pits the business-friendly Republican establishment against many of the conservative Tea Party activists who helped the Republicans win control of the House three years ago.

Many individual employers have been reluctant to publicly wade into the debate for fear of alienating potential customers, organizers of the effort say.

Conservative activists, by contrast, are not afraid to kick up dust in public.

Half an hour before Poe’s event this week, members of a Tea Party group unfurled signs on a freeway overpass several miles away that questioned Poe’s conservative bona fides. “TED POE: FRIEND OR FOE?” one sign read.

One member of the group, dispatched to monitor the roundtable, said she worried that “the elites, the One World Order types” were winning over conservative lawmakers such as Poe.

“I’m afraid since he’s gone to Congress and he’s been living in that cesspool that some of that dirt has rubbed off of him,” said Jeanne Hall, a Houston grandmother who worries that immigrants are taking jobs from Americans.

Poe, a former state judge who built a national reputation for handing out stiff punishments, has gone from skeptic to advocate in recent years on immigration reform.

Poe’s district is now 30 percent Hispanic, up from 13 percent when he was first elected in 2004. He has argued that his fellow Republicans need to work harder to appeal to this growing slice of the electorate to remain competitive with Democrats in future elections.

Last month he repudiated comments by Iowa Republican Representative Steve King after the immigration hard-liner said that young illegal immigrants who were brought into the country by their parents were more likely to wind up being drug smugglers than school valedictorians.

Unlike many of his fellow conservatives, Poe says tighter border security or tougher enforcement of existing laws won’t solve the problem alone. He said he is undecided about how to treat undocumented workers.

Beyond their roundtable meetings with lawmakers, some business owners are making sure they have a presence at town hall events.

After Poe’s roundtable this week, Houston insurance agency owner Norm Adams planned to drive three hours to another lawmaker’s public forum to ensure that opponents of an immigration overhaul weren’t the only ones in the room.

“Every time we have a chance, we clearly prove that they are the minority. But they’re the screamers, and the loudest,” Adams said.

More often this summer, business groups are making their case behind closed doors.

In Minnesota, business executives have peppered Republican Representative John Kline with questions on immigration at several private events, said Bill Blazar, a vice president at the Minnesota Chamber of Commerce.

In Colorado, a group of six business executives who collectively donated nearly $500,000 to Republicans in the 2012 election, wrote a letter on July 29 to the state’s four Republican House members last month urging them to support changes in immigration laws.

In Arizona, where Republicans in the state legislature have enacted one of the strictest immigration laws in the country, business leaders are arguing that a hard-line stance is not the political winner it once was.

In Texas, the state’s close ties with Mexico and a sizable Hispanic population have made many business leaders especially aware of the need to do something on immigration, and the state’s 24 Republican House members could play a pivotal role in the coming months. Representatives Sam Johnson and John Carter have worked for months to craft a compromise with Democrats, while Poe and others plan to push legislation on various issues.

Poe said he had heard a range of opinions from his constituents in recent weeks, from those who back the Senate plan to those who want to deport all of the nation’s 11 million undocumented residents. But he had not heard anything to sway his conviction that the issue must be addressed.

“There are those who with vocal rhetoric really don’t want anything fixed,” he said. “But immigration has been broken for a long time.”