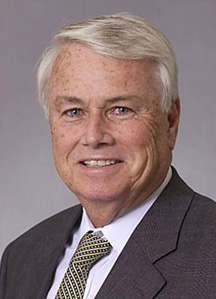 Rep. Elton Gallegly has been named as the Chair of the Immigration and Enforcement Subcommittee, rather than Steve King, as had been widely assumed.

I’m not completely sure what to think of this choice by Lamar Smith, the new Chair of the full Judiciary Committee. Was Gallegly chosen because King may have been seen as more of a verbal bomb-thrower on the subject of illegal immigration? Possibly.

Gallegly is no weakling on borders and sovereignty however. His career voting grade is A, and he has been in the House since 1987, four years longer than King.

My favorite quote from Rep Gallegly is ”The more we become a nation of illegal immigrants, the deeper we fall into anarchy.” So la Raza is probably not doing any cartwheels over the selection of the Ventura County Republican.

Initial indications are that jobs and workplace enforcement will be top priorities of the new Republican House, as Lamar Smith emphasized recently.

Immigration foe passed over for chairman of Judiciary subcommittee, The Hill, January 6, 2011

An avid illegal immigration foe, Rep. Steve King (R-Iowa) will not continue as the top Republican on the House Judiciary Committee’s Immigration subcommittee.——Judiciary Chairman Lamar Smith (R-Texas) announced his selection for subcommittee chairman on Friday, and California Rep. Elton Gallegly (R) was chosen to head the Immigration and Enforcement panel.

King, who served as the ranking Republican on the Immigration subcommittee since 2007, was selected as vice chairman of the panel.

He has long been an outspoken foe of illegal immigration – and has been viewed as the successor to former Rep. Tom Tancredo (R-Colo.) as the party’s lead anti-immigration proponent.

In 2006, King went to the House Floor and built a model of a concrete border fence that he suggested should be electrified.

”We could also electrify this wire with the kind of current that would not kill somebody, but it would simply be a discouragement for them to be fooling around with it. We do that with livestock all the time,” King said at the time.

On Thursday, the Iowa Republican introduced a bill to eliminate ”anchor babies.”

King’s bill would alter the 14th Amendment to the Constitution that declares, ”All persons born or naturalized in the United States, and subject to the jurisdiction thereof, are citizens of the United States and of the State wherein they reside.”

King’s measure would change the amendment to require that at least one of parent of a child born in the U.S. be a citizen.

A Judiciary committee source refrained from commenting on King’s relegation to vice chairman but explained that other ranking members of subcommittees did not ascend to chair their panels.

They did, however, take subcommittee chairmen positions on different Judiciary panels — with the exception of outspoken conservative Rep. Louie Gohmert (R-Texas.)

”We are a nation of immigrants, but we are also a nation of laws,” Gallegly said. ”Most of my district casework concerns helping legal immigrants. Like our ancestors, immigrants who come here legally want to be American citizens, with all the responsibilities that go with it. It is unfair to those who put in the time and effort to immigrate here legally to allow illegal immigrants to break in through the back door.