Remittances to Latin America: America’s Loss in Billions of Dollars

A new report from Pew Hispanic provides a reminder of how much money is strip-mined from the United States by foreign workers and sent to their homelands. In 2013, U.S. remittances accounted for three-quarters of the total in 2012 — $41 billion out of $52.9 billion sent to Latin American nations, according to World Bank data. (The report is available online: Remittances to Latin America Recover -— but Not to Mexico.) 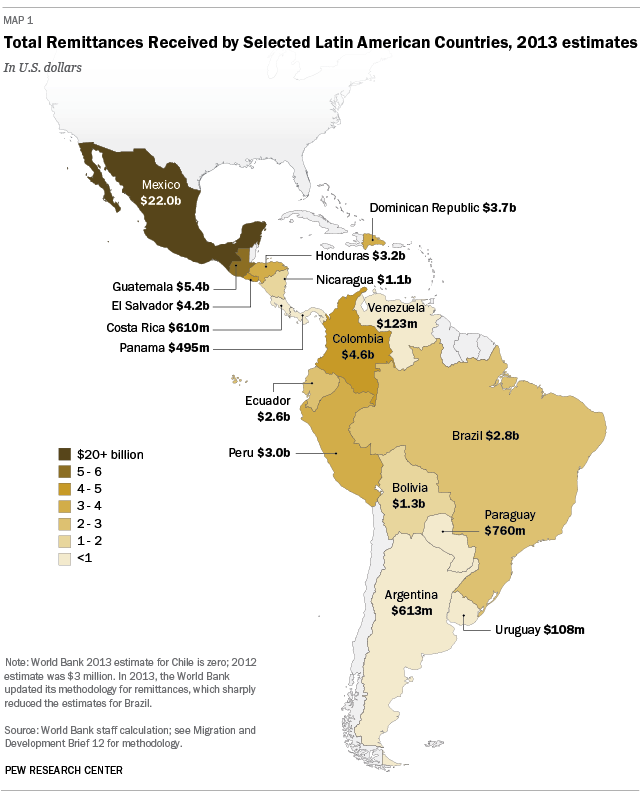 The LA Times likely wrote a friendly story because so many local residents are remittance senders.

The amount of money U.S. immigrants send to their families in Latin America has more than doubled since 2000, and the cash flow home — except to Mexico — has recovered from a considerable drop during the Great Recession, a 13-year survey of remittance trends shows.

In 2011, remittances totaled $53.1 billion, more than eight times the amount of official aid, the report says.

More than half of those immigrating from Spanish-speaking countries — 54% — send part of their U.S. earnings home, and 17% of U.S.-born Latinos also maintain financial lifelines to relatives abroad, the Pew research shows.

The remittance flows and trends were determined by a review of World Bank data from 2000 to 2013. While the amount of remittances rose steadily year on year in the first half of the last decade, the U.S. housing crisis that began in 2007 started taking a toll on immigrant workers’ largesse.

Remittances dropped significantly during the following two years, the researchers said, when construction and labor jobs dried up and the arrival of immigrants, versus the number departing the United States, shrank to near zero.

Money transfers to the 17 Latin American countries surveyed have picked up over the last four years, on course to reach $53.8 billion by the end of this year. But that figure remains 13% below the pre-recession peak of $61.6 billion in 2007, Pew reported.

For Mexico, the recession’s effect has been even more lingering, with this year’s expected remittance intake of $22 billion still down 29% from the 2006 peak. The decline apparently reflects the drop in Mexican immigration to the United States.

Other findings highlighted by the study:

– The United States is the most important source of remittances to Latin America, accounting for three-quarters of last year’s $52.9 billion total. Spain was the second-largest provider of money to Latin America, contributing 8%, or $4 billion, followed by Canada, where Latino immigrants sent home 1% of the regional total, or $704 million.

– A significant portion of remittances, in many cases the majority, was spent on food, clothing and other daily essentials. That allowed for rising living standards for recipients but left little for job-creating investment.

– Globally, India is the country taking in the most in remittances, with an estimated $71 billion this year from its legions of citizens working abroad. China ranks second, receiving $60.2 billion, and the Philippines, where more than one in 10 citizens is working overseas, will have received more than $26 billion by the end of this year. (That figure was determined before Typhoon Haiyan, which could spur more giving by Filipinos abroad.)

– The United States is the largest remitting nation worldwide, sending $123.3 billion abroad in 2012. Saudi Arabia, where 1.55 million Filipinos live and work, was the second-largest source, with $27.6 billion remitted last year, and Canada No. 3, with its $23.9 billion sent by foreign workers to their home countries in 2012.