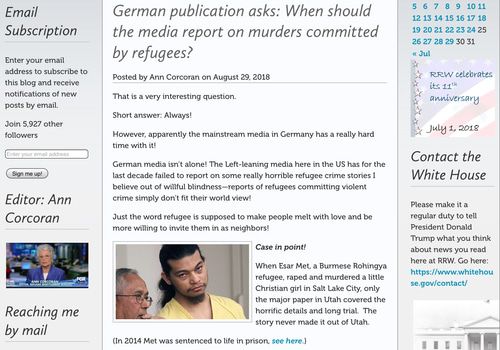 In my immediately-preceding blog post, I implored readers to phone the White House public-comments line with the suggestion that refugee intake for federal Fiscal Year 2019 be drastically reduced or, preferably, zeroed out.

Besides the talking points used in my call to the White House, I included links to some pertinent resources that could help readers customize their own calls.  The obvious resource is Ann Corcoran's Refugee Resettlement Watch blog, but it hosts such a staggering abundance of material that it may be daunting to formulate a message usable for a brief phone call by wading in there.

Subsequently, I remembered that four op-eds I had in Montana newspapers early in 2016 might serve as useful information sources for this purpose.  So here they are:

Butte Montana Standard, March 18, 2016, Refugee resettlement in U.S. hardly work of sacrificial charity  (Interestingly, the editors of Butte's paper appended to the online version of my op-ed the links to the sources that I'd submitted with it.)

Those are not the same op-ed written four different ways.  Instead, each is generally different from the other three, reflecting the fact that refugee resettlement is a big topic, with much to be said about it—not all sayable in a single 800-word op-ed.

It may be worth calling attention to a passage in the piece published by the Independent Record.  My op-ed was a rebuttal to a preceding one urging the importation of refugees to Montana written by Stephen Maly, vice-president of WorldMontana, a small civic organization.  Here's the passage:

Then there’s the point that Syrian refugees are nearly 100 percent Muslims. A marker of Maly’s naivete — or ignorance — is his assertion that “fruitful coexistence (between Muslims and Christians) is as old as our republic.”

He has things exactly backwards: In 1786, Thomas Jefferson and John Adams met in London with Tripoli’s ambassador to ask why the Barbary pirates were plundering U.S. merchant ships in the Mediterranean and enslaving the ships’ passengers and crews, as the young American nation had done the Barbary states no harm. Replied the ambassador, as reported by Jefferson, “It was written in their Koran, that all nations which had not acknowledged the Prophet were sinners, whom it was the right and duty of the faithful to plunder and enslave; and that every Mussulman who was slain in this warfare was sure to go to paradise.” Thus Jefferson and Adams were confronted by what contemporary Europeans knew: Islam is the West’s historic, mortal enemy.

Consistent with this, in his diary for July 24, 1805, when the Corps of Discovery was near present-day Townsend, Meriwether Lewis wrote, matter-of-factly, "Our trio of pests still invade and obstruct us on all occasions, these are the Musquetoes eye knats and prickley pears, equal to any three curses that ever poor Egypt laiboured under, except the Mahometant yoke."

Of course, the reference is to the Lewis and Clark expedition, important in Montana's history.  And that's Townsend, Montana, a small burg on the Missouri River about 30 miles upstream from the Helena area.
The middle paragraph in that passage acknowledges a striking, widely-known fact about Jefferson and Adams.  But what's recounted in the third paragraph is much more obscure, while being well worth knowing about, as it suggests that knowledge of Islam's threat to civilization was widespread during the Founding era.  I learned about it from the late, lamented Lawrence Auster, who discovered it in a Montana guidebook while visiting me here in 2005.  Subsequently, I found a scholarly source for it in the University of Nebraska at Lincoln's online Journals of the Lewis & Clark Expedition.
Perhaps some readers can use the Meriwether Lewis quote in their phone calls to the White House comments line!  202-456-1111!!!