Marco Antonio Rubio has been betrayed by his body before, most memorably when he nervously reached for a water bottle during the Republican response to the 2013 President’s State of the Union address. (Watch video.) The establishment suits had portrayed Rubio as the diverse young Republican, ready for higher office. But he failed under intense scrutiny then, as he failed during his recent appearance with Bill O’Reilly. Note how the ears match the facial coloring during the water episode. 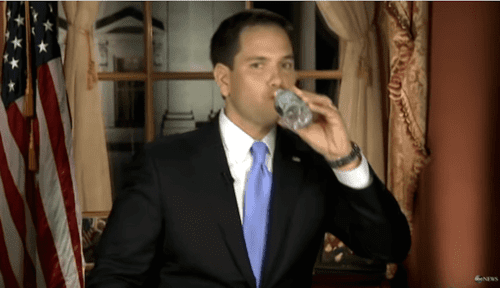 On Monday, the main topic out of the box was immigration, and the physical expression of stress was a little different, with a noticeable blush occurring in his ears which can be an indication of lying. Marco the Red-Eared Senator squirmed under the direct questioning from Bill O’Reilly even though Rubio has recited his immigration spiel hundreds of times.

Rubio aims to reach the White House through lies, as he has done throughout his political career. His youthful looks hide a calculating politician whose ambition is boundless. He would love to be the Cuban president — of the United States.

Here’s a video of the interview.

O’REILLY: Let’s talk a little policy tonight. We’ve got about 12 million illegal immigrants currently living here in the USA. Mr. Trump says he would deport all of them. Would you?

RUBIO: Well the ones that are dangerous criminals, the ones that are violent, the ones who pose a threat would be immediately deported, and many others will have to leave or be deported because they don’t qualify. They’ve been here long enough, but I can just tell you that what we do with the rest of them is not even something we’re going to have a debate about until we first secure our border and only after we secure our border, then we’ll see what the American people are willing to support when it comes to someone who’s been here for a long time, is not otherwise a criminal, has passed a background check, learns English, pays a fine, starts paying taxes, we’ll see what the American people support. We can’t do it all at once. it’s got to be secure the border first.

O’REILLY: And we assume anyone who wins the Republican nomination will do that if they become president, but I’m interested in your vision . . .

RUBIO: As far as the 12 million that are here, look I don’t believe the American people support some sort of militaristic roundup of individuals and I don’t think you can carry it out that sort of tactics that would require would offend the American people. . .

Here’s what I suggested in the past: if someone has been here for a defined period of time, they can pass a background check, if they committed crimes they can’t stay, they have to pay a tax, start paying taxes, they’re going to have to pay a substantial fine because they the violated the law and in exchange for all of that they can apply and receive a work permit and that’s all they’re gonna be allowed to have, a permit that allows them to work here and and travel, and that’s it. That’s all they’ll be allowed to have for a very significant period of time. I think that’s something the American people might be open to only after our borders are secure.

For Rubio, the road always gets to amnesty even when he pledges to leave it up to the American people, whom he mentioned nine times in four minutes. After the borders are “secure” (whatever that really means), then the foreign job thieves will be awarded with exactly what they came for — free and legal access to American employment. And Rubio hints that eventual voting is on the table, even though illegal aliens aren’t interested in the responsibilities of citizenship — only the yankee dollars. That’s why . . .

The work permit is the real amnesty.

And Marco Rubio will bring it, if permitted.