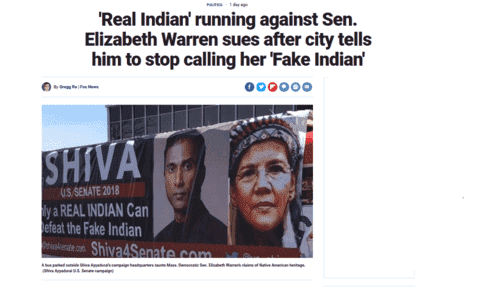 Real Indian Vs. Fake Indian—It’s Funny, But Do We Really Need "Real Indians" At All?

One of the more amusing stories you’ll see today recounts the legal fight between independent U.S. Senate candidate Shiva Ayyadurai and Cambridge, Mass., which ordered him to remove an anti-Elizabeth Warren sign.

Ayyadurai’s offense? Telling the truth about Fauxcahontas in a poetic way: “Only The Real Indian,” the sign says, “Can Defeat the Fake Indian.” The sign also features pictures of the Real Indian and Warren wearing a headdress.

Amusing as this is, a question: Why are we allowing foreigners to move here and run for office.

I’m happy to see such individuals succeed. But I don’t want them, or their children, in public office.

The only “real Indians” who deserve a shot at public office are the kind who built teepees, hunted buffalo and fought the 7th Cavalry.