They are at it again. La Raza ("The Race" in English) is complaining about "hate speech" among immigration restrictionists. The Razas are particularly miffed at the few members of the MSM who consistently tell the truth about open borders, particularly Lou Dobbs, Pat Buchanan and Glenn Beck.

A national Latino group said Thursday it is fighting back against what it considers to be "hate speech" that has emerged from the debate over immigration.

The group launched a Web site to counter the speech, www.wecanstopthehate.org, with clips of what it considers offensive comments on television as well as a tracking of hate crimes. ["Hate Speech Cited in Immigration Debate," Google AP, Jan 31, 2008]

According to La Raza, it is hate speech to mention facts like the belief of many Mexicans that the southwest belongs to them; in fact, the reputable Zogby polling organization found in 2002 that 58 percent of Mexicans agree with that idea.

Mexicans have essentially declared war on America via immigration, and even have a name for it — reconquista. But when anyone shines a light on their activities against America, Razas squawk about non-existent racism and hate because they have no rational arguments.

"I'm exercising free speech and I'm giving my opinion," Gilchrist said. "My son-in-law is Mexican and two of my three grandchildren are half Mexican. The Minuteman Project is comprised of every race, color and creed." 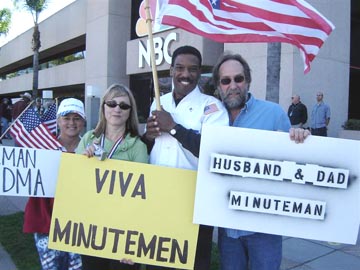