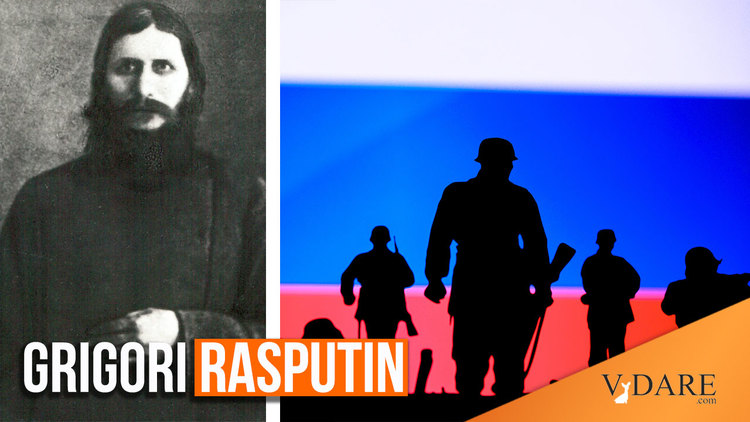 In the summer of 1914, the military intelligence unit of Orthodox Slavic Serbia organized a large conspiracy to assassinate the heir to the Austro-Hungarian throne, the Archduke Franz-Ferdinand. In response, Vienna demanded a role in punishing the guilty. Serbia acceded to most Austro-Hungarian demands but turned that down. Vienna declared war on Belgrade.

Czar Nicholas II then felt bound to declare war on Austro-Hungary. The German General Staff leapt at this chance to go to war with fast-growing Russia sooner rather than later and overrode the misgivings of Nicholas’s first cousin Kaiser Wilhelm II. Under the Schlieffen plan, Germany’s route to winning a two-front war was to invade France through neutral Belgium and quickly take Paris while letting the slower-moving Russians invade East Prussia, then, after neutralizing France, wheel to crush Russia. But howls of pain from East Prussian aristocrats led Berlin to pull some units out of the attack on Paris. The Germans battered the Russian invaders, but French reconnaissance aircraft noticed the gap in the German armies and the Paris reserve was rushed in taxicabs to victory at the Marne, which led to four years of trench warfare on the Western Front.

Two of the Czar’s advisers dissented from declaring war on Austria-Hungary, the Siberian holy man Rasputin (who foresaw nothing but blood for Russian peasants) and the distinguished reformist technocrat Count Witte. The memoirs of the pro-war French ambassador to St. Petersburg, the intriguingly named Maurice Paléologue, offer some insight into their views.

The Marne victory is hailed as a deliverance in all Russian social circles. Congratulations are pouring in to the Embassy. But the recent disaster at Soldau and disquieting rumours in the last two days as to the course of the great battle in progress in … East Prussia are casting a general gloom over men’s minds and rendering them almost indifferent to the brilliant successes in Galicia. And even if the public pays a generous tribute to the heroism of the French army and General Joffre’s skill in manoeuvre, it does not fail to add that if it were not for the terrible hecatomb of Soldau the Germans would now be in Paris.

Rasputin has recovered from his wound and has returned to Petrograd. It has been easy for him to prove that his recovery is striking proof of divine protection.

When he speaks of the war it is only in veiled, ambiguous, and apocalyptic terms, and the conclusion is drawn that he does not approve of it and anticipates great misfortunes.

Someone else has just come back to Petrograd on whose return I have equally little cause to congratulate myself, as he has done nothing but give vent to lugubrious prophecies since his arrival—I mean Count Witte, who was at Biarritz when war broke out. He called on me the day before yesterday.

… As an excuse for his visit he reminded me of our meeting in Paris in the autumn of 1905, and at once, without any preliminaries, opened a discussion, head erect, eyes fixed on me, and his speech firm, precise, and slow:

“This war’s madness,” he said. “It has been forced on the Tsar’s prudence by stupid and short-sighted politicians. It can only have disastrous results for Russia. France and England alone can hope to derive any benefit from victory. . . . and, anyhow, a victory for us seems to me highly questionable.”

[Paléologue:] “Of course the benefits to be derived from this war—as from any other war—depend upon victory. But I presume that if we are victorious Russia will get her share, and a large share, of the advantages and rewards. . . . After all, forgive me for reminding you that if the world is now on fire it is in a cause which interested Russia first and foremost, a cause which is eminently the Slav cause and did not affect either France or England.”

[Witte:] “No doubt you’re referring to our prestige in the Balkans, our pious duty to protect our blood brothers, our historic and sacred mission in the East? Why, that’s a romantic, old-fashioned chimæra. No one here, no thinking man at least, now cares a fig for these turbulent and vain Balkan folk who have nothing Slav about them and are only Turks christened by the wrong name. We ought to have let the Serbs suffer the chastisement they deserved. What did they care about their Slav brotherhood when their King Milan made Serbia an Austrian fief? So much for the origin of this war! Now let’s talk about the profits and rewards it will bring us. What can we hope to get? An increase of territory. Great Heavens! Isn’t His Majesty’s empire big enough already? Haven’t we in Siberia, Turkistan, the Caucasus, Russia itself, enormous areas which have not yet been opened up? . . . Then what are the conquests they dangle before our eyes?

[Witte:] “East Prussia? Hasn’t the Emperor too many Germans among his subjects already? Galicia? It’s full of Jews! Besides, the moment we annex Austria and Prussia’s Polish territories we shall lose the whole of Russian Poland. Don’t you make any mistake: when Poland has recovered her territorial integrity she won’t be content with the autonomy she’s been so stupidly promised. She’ll claim —and get—her absolute independence. What else have we to hope for? Constantinople, the Cross on Santa Sophia, the Bosphorus, the Dardanelles? It’s too mad a notion to be worth a moment’s consideration! And even if we assume a complete victory for our coalition—the Hohenzollerns and Hapsburgs reduced to begging for peace and submitting to our terms—it means not only the end of German domination but the proclamation of republics throughout Central Europe. That means the simultaneous end of Tsarism! I prefer to remain silent as to what we may expect on the hypothesis of our defeat.”