Rasmussen Poll: Nearly Half of Voters Say They Are Closer to Tea Party Than Congress in Political Views

Since the Dems got shellacked in the 2010 election, they have tried to paint Tea Party citizens as "extreme" - as if demanding responsible spending of Washington were somehow excessive.

Sen. Harry Reid predicted that grass-roots financial conservatism would quickly disappear when members became disinterested. Recent reports from the dinosaur media have suggested that the Tea Party influence is on the wane. Really?

Below, Boston Tea Partiers rally in 2010. 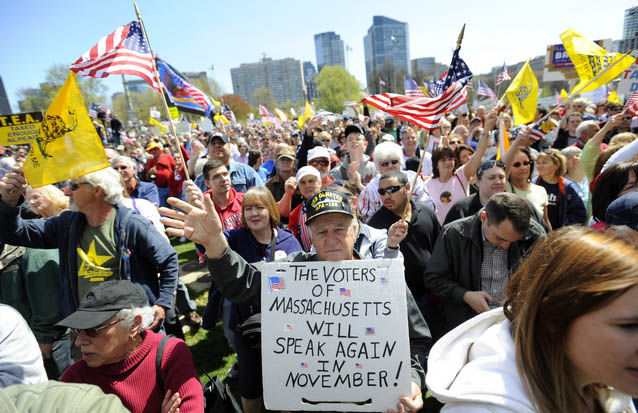 In fact even after all the media trash-talk, a substantial portion of the voting public still finds the arguments of the Tea Party persuasive, according to the Rasmussen pollsters.

In the ongoing budget-cutting debate in Washington, some congressional Democrats have accused their Republican opponents of being held captive by the Tea Party movement, but voters like the Tea Party more than Congress.

This shows little change from a survey in late March of last year.

Forty-nine percent (49%) of voters think the Tea Party movement is good for the country, consistent with findings since May 2010. Twenty-six percent (26%) disagree and say the grassroots, small government movement is bad for America. Sixteen percent (16%) say neither.

Forty-four percent (44%) of Republicans say they are members of the Tea Party, with another eight percent (8%) who have family members or friends who are in the group. Sixty-seven percent (67%) of Democrats have no ties to the group. Seventy-eight percent (78%) of Republicans - and 54% of voters not affiliated with either major political party - say the movement is good for the country. A plurality (48%) of Democrats sees it as bad for the country.

There's a similarly sharp divide between Mainstream and Political Class voters. Fifty-nine percent (59%) of those in the Mainstream think the Tea Party is good for America, but 69% of the Political Class say it's a bad thing. There are comparable differences of opinion when it comes to whose views are closest to their own and who has a better understanding of today's problems.

But then 38% of Mainstream voters are either Tea Party members or have a family member or friend who belongs to the movement. Ninety-four percent (94%) of those in the Political Class have no ties to the Tea Party.

Tea Party support was one factor leading to big congressional gains for Republicans in the November mid-term elections. But by mid-December, only 34% of voters expected newly elected Tea Party legislators to remain true to their beliefs. But Tea Party members were far less skeptical than non-members.

Voters see "Tea Party" a bit less negatively as a political label these days, while "liberal" and "progressive" have lost ground even among Democrats. "Conservative" remains the most favored description.

Voters continue to view the Republican agenda in Congress as more mainstream than the agenda of the Democrats. But only one-in-four voters think the average member of either party shares the same ideology they do.

Capitol Hill is deadlocked over how deep to cut the current federal budget with Republicans hoping to cut nearly twice as much as Democrats. Yet while voters like the idea of big spending cuts, 53% don't think even the GOP cuts will make much of a difference. ButÂ 57% think making deeper spending cuts in the federal budget for 2011 isÂ more important than avoiding a government shutdown.

Most voters have consistently said for years that cutting taxes and reducing government spending are best for the economy.