Many elected officials want the immigration issue to go away so they can continue servicing the businesses that demand slave-cheap workers. But the little citizens notice the worsening state of the nation due to open borders and permissive immigration — there is less respect for law, more danger from jihadist enemies, schools overwhelmed with illegal alien children, citizen workers forced to train their foreign replacements and a raft of other problems stemming from chaos. 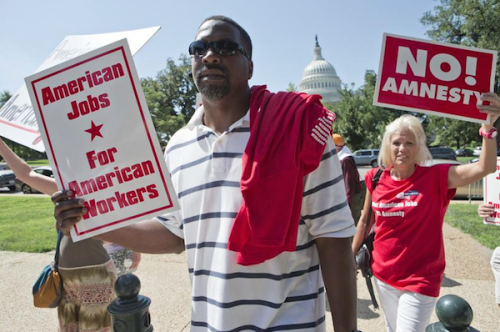 The voters have noticed how badly the administration is running immigration and the borders, a fact which a recent poll reveals.

A growing number of voters consider illegal immigration a serious problem and believe controlling the border is the most important thing the government can do, even if using the military is necessary.

A new Rasmussen Reports national telephone survey finds that 77% of Likely U.S. Voters now consider illegal immigration a serious problem in America today, with 51% who say it is Very Serious. Just 19% don’t think it’s a serious problem, and that includes only three percent (3%) who say it’s Not At All Serious. (To see survey question wording, click here.)

While overall concern about illegal immigration is unchanged from January, the number who think it is a Very Serious problem is up from 47%.

As they have for years, most voters (63%) think gaining control of the border is more important than legalizing the status of undocumented workers already living in the United States. While that’s up just two points from January, it is the highest level of support for border control since December 2011.

Most voters (63%) still agree that the U.S. military should be used along the Mexican border to prevent illegal immigration, but that’s up from 57% in January and is the highest finding since December 2012. Just 26% disagree, while 12% are undecided.

Fifty-eight percent (58%) believe providing a pathway to citizenship for those currently in the country illegally will just encourage more illegal immigration, also up from January. Just 24% disagree, but 19% are not sure.

Similarly, 72% think it’s likely that the Obama administration’s decision to allow the wave of young illegal immigrants last summer to stay will encourage more illegal immigration by young people this summer. Most voters have said for years that the policies and practices of the federal government encourage people to enter the United States illegally.

The survey of 1,000 Likely Voters was conducted on April 29-30, 2015 by Rasmussen Reports. The margin of sampling error is +/- 3 percentage points with a 95% level of confidence. Field work for all Rasmussen Reports surveys is conducted by Pulse Opinion Research, LLC. See methodology.

More than half of voters remain opposed to Obama’s new plan that will allow nearly five million illegal immigrants to remain in this country legally and apply for jobs. Forty-seven percent (47%) think Congress should try to find ways to stop the president’s plan, while 41% believe Congress should allow this decision to stand.

However, 54% still agree that the goal of immigration policy should be to keep out only national security threats, criminals and those who would come here to live off our welfare system, in line with findings since 2010. Twenty-nine percent (29%) disagree, and 17% are not sure.

But while most voters still have a favorable opinion of those who move to this country to work hard, support their family and pursue the American Dream, barely half believe most immigrants are like that these days.

Most voters in nearly every demographic category rate illegal immigration a serious problem and think border control is the most important step to take to combat it.

Eighty-three percent (83%) of Republicans and 65% of voters not affiliated with either major political party think securing the border is more important than legalizing the status of current illegal immigrants. Democrats by a narrow 48% to 42% margin disagree and put legalizing those who are already here first.

But then 72% of GOP voters and 63% of unaffiliateds believe that providing a pathway to citizenship for those who are here illegally just encourages more illegal immigration. Only 40% of Democrats agree. Republicans and unaffiliated voters also feel more strongly that the U.S. military should be used along the border.

Voters under 40 are less likely than their elders are to view illegal immigration as a Very Serious problem but are only slightly more likely to support legalizing the status of those already living here.

Black voters are less likely than white and other minority voters to think offering a pathway to citizenship encourages more illegal immigration. Other minorities are slightly less supportive of using the U.S. military along the border.

More voters than ever (62%) feel the United States is not aggressive enough in deporting those who are here illegally.

Most also think the Mexican government doesn’t do enough to stop illegal immigration and drug trafficking and favor stopping foreign aid to our southern neighbor until it does more to prevent illegal border crossings.