A recent survey shows the voting public to be strongly in favor of photo identification at the polling place.

In doing so, citizens agree with the Supreme Court, which determined in 2008 that photo ID is not an undue burden to participate in American elections (High court upholds Indiana’s voter ID law, CNN, April 28, 2008).

The Attorney General has made a big deal out of opposing measures which would prevent voter fraud, and is out of step with the American people in pursuing that course — not for the first time. (For example, his insistence on holding 9/11 terror trials in New York City was very unpopular even among NY Democrats and he eventually withdrew the idea.)

The Obama administration claims requiring voter identification is a resurgence of Jim Crow discrimination against black voters, but indications accumulate that the Democrats hope for a big turnout of illegal aliens to win in 2012. 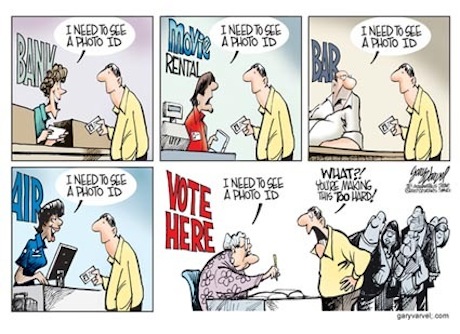 Attorney General Eric Holder signaled last week that the Justice Department will be closely examining new state laws that require showing a photo ID before voting for potential racial bias, but voters nationwide overwhelmingly favor such a requirement and reject the idea that it is discriminatory.

Seventy percent (70%) of Likely U.S. Voters believe voters should be required to show photo identification such as a driver’s license before being allowed to cast their ballot. A new Rasmussen Reports national telephone survey finds that just 22% oppose this kind of requirement. (To see survey question wording, click here.)