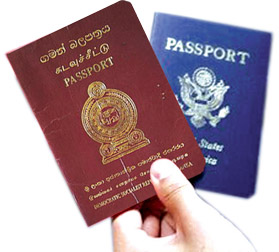 The issue of dual citizenship is an interesting one, because it is so little discussed in the public sphere. Even so, a majority of US voters don’t think it is acceptable.

My take is that Americans understand the basic unfairness of dual citizenship and the corollary of immigrants having a spare country in case things go bad here. Plus, the policy promotes dual allegiance, and the principle of polygamy applied to nationality.

Border security and a path to citizenship are the most talked about issues when it comes to immigration reform, but another part of the debate involves multiple citizenships. Thirty-four percent (34%) of Likely U.S. Voters say that if someone wants to become an American citizen, he or she should be allowed to remain a citizen of another country at the same time.

A new Rasmussen Reports national telephone survey shows that 54% of voters don’t think potential U.S. citizens should be allowed to maintain dual citizenship. Another 12% are undecided.