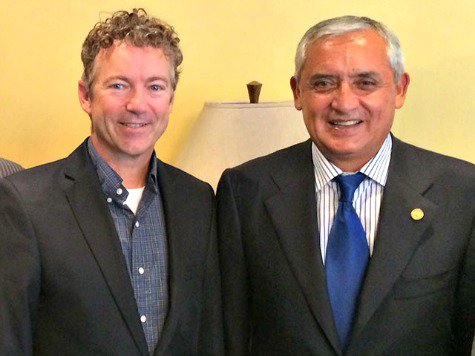 Rand Paul and the President of Guatemala

Rand Paul was once hailed by his followers as a uniquely principled statesman, but he has rapidly become a caricature of the typical, flip-flopping politician.  This is especially true on immigration, where Paul veers wildly between passionately arguing for amnesty and then thinking of reasons to vote against it.

A charitable reading of this is that Paul is simply more practical and skilled than his father, and is trying to keep his Republican adversaries off balance in preparation for his 2016 Presidential run.  However, the other interpretation is that Paul, like other leading Republicans, is waiting for the opportunity to plunge his knife into the back of his base by passing amnesty.

Rand Paul was recently in Guatemala for a widely publicized charity function, providing eye care for poor Guatemalans (because all Americans have excellent free health care.)  Obviously, the real purpose here was not Christian charity, as the massive journalist presence seems an especially blatant violation of Matthew 6:2, which urges believers to perform their alms in secret.

However, even Paul's PC friendly pandering was coupled with a move to the Right on immigration, as Senator Paul blamed President Obama for the refugee crisis in a meeting with Guatemalan President Otto Perez Molina.  This statement was meant to be conveyed to the conservative base, as Paul was accompanied on his trip by conservative media outlets such as Breitbart, National Review, the Christian Broadcasting Network, and Citizens United.

It comes from the president basically offering unilaterally, without congressional approval, beacons or magnets without securing the border. He seems to be doing this again, because he doesn’t have what it takes to get Congress to pass legislation. So it all starts, as many conservatives say, you can’t have immigration reform without first having a secure border. But I think what’s happened at the border is all squarely at the president’s lap. The problem and the solution aren’t in Guatemala. The problem and solution reside inside the White House.

Needless to say, this still leaves the door open for amnesty.  However, Senator Paul (or his advisors) knew the headline would still read that Paul was criticizing the President—and Paul would in turn be criticized by Democrats.

Paul thus builds up credibility among immigration patriot conservatives who would otherwise be skeptical of Paul's "look at how great I am to Hispanics" publicity effort.  It's a wise political maneuver.

Senator Paul may not have thought deeply about the impact of mass immigration on limited government—but he's obviously thought a lot about how to become President.