Today’s police officers face diversity in crime they never could have imagined a generation ago, before America stupidly began admitting historic enemies of the West with the idea that diversity is the highest good. The latest is a sword-wielding man, Montasir Ishag, in Rancho Cucamonga who attacked deputies while yelling “Allah Ackbar” the traditional jihadist shriek. One hears it often on TV news from the Middle East as Muslims murder in the name of Allah, which makes everything okay is their evil “religion.”

The deputies were responding to a call from a concerned father who said junior was having an episode due to a combo of meth and bipolar disorder. Funny how such breakdowns are often acted out by Muslims in the form of Sudden Jihad Syndrome (as coined by Islam scholar Daniel Pipes). In other words, the freakout may be genuinely psychological, but Islamic culture too often dictates the expression thereof.

Police were forced to plunk Ishag with a shotgun beanbag round, which was quite humane of them.

Below, some Muslim kiddies are raised with the idea that smiting infidels is part of a well rounded Islamic life. 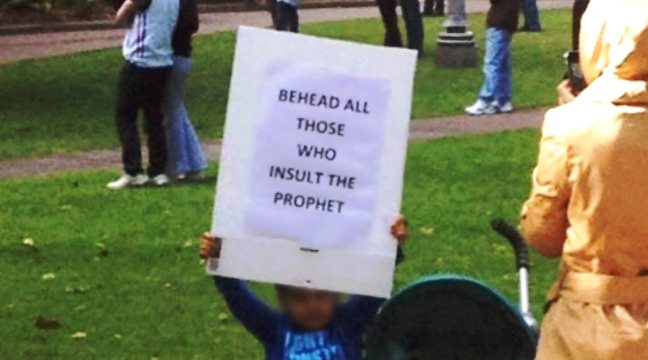 If the government were to end Muslim immigration, then Americans would have much less Sudden Jihad Syndrome to face. Admitting unfriendlies is really dumb.

A sword-wielding 33-year-old Rancho Cucamonga man charged deputies while hollering “Allah Akbar,” sheriff’s officials say, until the deputies halted him with a blast from a bean bag shotgun.

Montasir Ishag was arrested at 9 p.m. Tuesday, Aug. 27, along the 9400 block of Glenaire Court and booked for investigation of attempted murder of a police officer, jail records show. His bail is $1 million.

Deputies were summoned to the house at 1:26 p.m. by a caller who said his son was under the influence of meth and was having a bi-polar episode, sheriff’s officials said in a written statement.

The caller also said his son had a sword in his bedroom and feared for his safety.

“When deputies entered the front door, … Ishag charged the deputies with a sword, while yelling ‘Allah Akbar,’” according to the statement. “Deputies used a less than lethal shotgun.”

Ishag was taken to San Antonio Community Hospital for treatment of his injuries before being booked.