Saudi Arabia has been in the news recently and in a bad way, in particular about how Washington covered up the Kingdom’s complicity in the 9/11 attacks on America. On April 10, Sixty Minutes presented 28 Pages, a segment about the classified section of a Congressional inquiry into 9/11 and the possible existence of a Saudi support network for the hijackers while they were in the US preparing for the attacks.

It seemed obvious at the time that something funny was going on when over a hundred wealthy Saudis were allowed to fly out of the US on private jets a couple days after 9/11 when all other air travel was still grounded.

Ralph Peters was on Fox News Sunday, giving the Saudis some well deserved condemnation for funding jihad terror around the world. It was sobering when he said that there was a better chance in the long term for a rapprochement with evil Iran than any real reform in Saudi Arabia.

Listening to Peters expound upon Saudi evil, I was also reminded of the tens of thousands of students from the Kingdom who are taking up much desired American college slots. That situation exists thanks to President George W. Bush who thought US educations would be a swell way to improve relations between the countries after 9/11. He got together with Crown Prince Abdullah to set up the King Abdullah Scholarship Program and announced it in 2005. Only 2,500 Saudis attended US colleges in 2005, yet by 2015 the number had exploded to over 80,000 as a result of the scholarship program.

So America is also culturally enriched by the presence of many thousands of Saudis — not all of whom are housebroken in terms of non-drooling behavior toward women and driving a car with proper care. One scholarship recipient, Khalid Aldawsari, used his presence to plot an assassination of President Bush — a Saudi expression of gratitude probably. He was convicted in 2012. 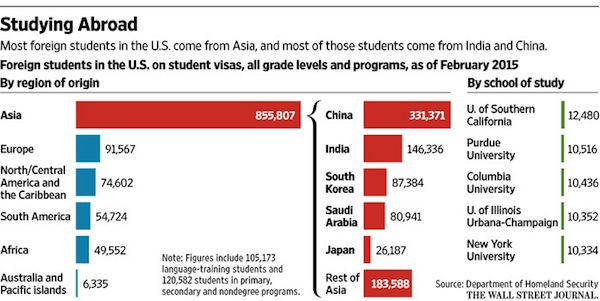 Here’s Ralph Peters’ opinion piece about the Saudis that got him interviewed on Fox.

Iran is our external enemy of the moment. Saudi Arabia is our enduring internal enemy, already within our borders and permitted to poison American Muslims with its Wahhabi cult.

Oh, and Saudi Arabia’s also the spring from which the bloody waters of global jihad flowed.

Iran humiliates our sailors, but the Saudis are the spiritual jailers of hundreds of millions of Muslims, committed to intolerance, barbarity and preventing Muslims from joining the modern world. And we help.

Firm figures are elusive, but estimates are that the Saudis fund up to 80% of American mosques, at least in part. And their goal is the same here as it is elsewhere in the world where Islam must compete with other religions: to prevent Muslims from integrating into the host society.

The Saudis love having Muslims in America, since that stakes Islam’s claim, but it doesn’t want Muslims to become Americans and stray from the hate-riddled cult they’ve imposed upon a great religion.

The tragedy for the Arabs, especially, has been who got the oil wealth. It wasn’t the sophisticates of Beirut or even the religious scholars of Cairo, but Bedouins with a bitter view of faith. The Saudis and their fellow fanatics in the oil-rich Gulf states have used those riches to drag Muslims backward into the past and to spread violent jihad.

The best argument for alternative energy sources is to return the Saudis to their traditional powerlessness.

I’ve seen Saudi money at work in country after country, from Senegal to Kenya to Pakistan to Indonesia and beyond. Everywhere, their hirelings preach a stern and joyless world, along with the duty to carry out jihad (contrary to our president’s nonsense, jihad’s primary meaning is not “an inner struggle,” but expanding the reach of Islam by fire and sword).

Here’s one of the memories that haunt me. On Kenya’s old Swahili Coast, once the domain of Muslim slavers preying on black Africans, I visited a wretched Muslim slum where children, rather than learning useful skills in a state school, sat amid filth memorizing the Koran in a language they could not understand. According to locals, their parents had been bribed to take their children out of the state schools and put them in madrassas.

Naturally, educated Christians from the interior get the good jobs down on the coast. The Muslims rage at the injustice. The Christians reply, “You can’t all be mullahs — learn something!” And behold: The Saudi mission’s accomplished, the society divided.

The basic fact our policy-makers need to grasp about the Saudis is that they couldn’t care less about the welfare of flesh-and-blood Muslims (they refuse to take in Syrian refugees but demand Europe do so). What the Saudis care about is Islam in the abstract. Countless Muslims can suffer to keep the faith pure.

The Saudis build Muslims mosques and madrassas but not hospitals and universities.

Another phenomenon I’ve witnessed is that the Saudis rush to plant mosques where there are few or no Muslims, or where the Wahhabi cult still hasn’t found roots. In Senegal, with its long tradition of humane Islam, religious scholars dismiss the Saudis as upstarts. Yet, money ultimately buys souls and the Saudis were opening mosques.

And jihadi violence is now an appealing brand.

In Mombasa, Kenya, you drive past miles of near-empty mosques. Pakistan has been utterly poisoned, with Wahhabism pushing back even the radical (but less well-funded) Deobandis, the region’s traditional Islamist hardliners.

Shamelessly, the Saudis “offered” to build 200 new mosques in Germany for the wave of migrants. That was too much even for the politically correct Germans, and Chancellor Angela Merkel’s deputy had as close to a public fit over the issue as toe-the-line Germans are permitted to do.

But our real problem is here and now, in the United States. Consider how idiotic we’ve been, allowing Saudis to fund hate mosques and madrassas, to provide Jew-baiting texts and to do their best to bully American Muslims into conformity with their misogynistic, 500-lashes worldview. Our leaders and legislators have betrayed our fellow citizens who happen to be Muslim, making it more difficult for them to integrate fully into our society.

In the long run, the Saudis will lose. The transformative genius of America will defeat the barbarism. But lives will be wrecked along the way and terror will remain our routine companion.

Why did we let this happen? Greed. Naivety. Political correctness. Inertia. For decades, the Saudis sent ambassadors who were “just like us,” drinking expensive scotch, partying hard, playing tennis with our own political royalty, and making sure that American corporations and key individuals made money. A lot of money.

But they weren’t just like us. First of all, few of us could afford the kind of scotch they drank. More important, they had a deep anti-American, anti-liberty, play-us-for-suckers agenda.

And we let the Saudis exert control over America’s Muslim communities through their surrogates. No restrictions beyond an occasional timid request to remove a textbook or pamphlet that went too far.

Think what we’re doing: The Saudis would never let us fund a church or synagogue in Saudi Arabia. There are none. And there won’t be any.

Wouldn’t it make sense for Congress to pass a law prohibiting foreign governments, religious establishments, charities and individuals from funding religious institutions here if their countries do not reciprocate and practice religious freedom? Isn’t that common sense? And simply fair?

Saudi money even buys our silence on terrorism.

Decades ago, the Saudi royal family realized it had a problem. Even its brutal practices weren’t strict enough for its home-grown zealots. So the king and his thousands of princes gave the budding terrorists money — and aimed them outside the kingdom.

Osama bin Laden was just one extremist of thousands. The 9/11 hijackers were overwhelmingly Saudi. The roots of the jihadi movements tearing apart the Middle East today all lie deep in Wahhabism.

Which brings us to 28 pages redacted from the 9/11 Commission’s report. Those pages allegedly document Saudi complicity. Our own government kept those revelations from the American people. Because, even after 9/11, the Saudis were “our friends.”

(We won’t even admit that the Saudi goal in the energy sector today is to break American fracking operations, let alone face the damage their zealotry has caused.)

There’s now a renewed push to have those 28 pages released. Washington voices “soberly” warn that it shouldn’t be done until after the president’s upcoming encounter with the Saudi king, if at all.

If we’re unlucky, we may end up fighting Iran, which remains in the grip of its own corrupt theocracy — although Iranian women can vote and drive cars, and young people are allowed to be young people at about the 1950s level. But if fortune smiles and, eventually, the Iranian hardliners go, we could rebuild a relationship with the Iranians, who are the heirs of a genuine, Persian civilization. Consider how successful and all-American Iranian-Americans have become.

War with Iran will remain a tragic possibility. But the Saudi war on our citizens, on mainstream Islam, and on civilization is a here-and-now reality.