When I was a kid in the last century, one of my fathers best friends worked as a fireman on the Erie Railroad (even though diesel engines did not require a man shoveling coal to keep the train running). He earned a comfortable middle-class living for himself and his wife from that job.

Now efficiency, technological advances and the demands for maximum profit have pruned the train workforce enormously. Like other areas of the economy, smart machines are moving in like gangbusters. The outlook for workers in general is dire: one analyst estimates that one in three jobs will be done by smart machines by 2025, only 11 years from now. Oxford University researchers estimated in a 2013 study that 45 percent of US jobs are vulnerable to computerization in the next 20 years.

The current debate in the railroad world concerns one worker operating entire freight trains which have grown in length over the years. Naturally the people who know what happens on the ground think it is a bad idea because of the myriad of things that can go wrong and require a human to fix. (See the lengthy list: What’s Wrong with Single Employee Train Operations?, By Ron Kaminkow, General Secretary, Railroad Workers United.)

Plus, the number crunchers in the boardroom are already looking toward RCO, aka Remote Control Operation.

Below, an Amtrak control center in New York shows the railroads computerized future where far fewer humans are needed for operation. 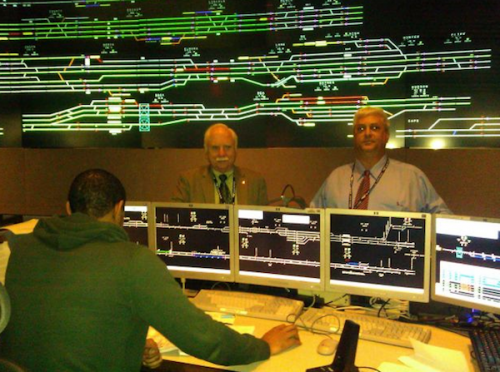 The recent Associated Press report helpfully included some important historical details about the shrinking railroad workforce from a post-war seven to two now and potentially one in the near future. Why are people perplexed by the lack of jobs in this economy? The decline of workers because of smart machines is happening everywhere.

Of course, it is obvious that America doesnt need to import hordes of immigrants when millions of citizens cannot find full-time work.

When American freight trains delivered cargo after World War II, the steam-belching beasts commonly had seven people aboard an engineer, a conductor, up to four brakemen and a fireman.

Trains have since grown much longer, seemingly stretching to the horizon and often taking 20 minutes to pass through a crossing. And crews have been reduced in size to five people in the 1970s and two in 1991. Now U.S. railroads want to put a single person in charge of todays huge locomotives, taking another step toward a future in which the nations rail-cargo system increasingly could resemble toy train sets highly mechanized networks run by computers or distant controllers.

For the moment, freight trains generally have two people aboard an engineer who drives the train and a conductor who oversees the long line of cars. Railroad executives want to reduce that to a lone engineer, saying advances in safety systems, including a new automatic braking system under development, could minimize risks.

But labor groups and people who live near rail lines are skeptical.

These trains are 7,000 tons going 50 mph. You have to have two people, said J.P. Wright, an engineer for CSX railroad in Louisville, Kentucky. Its mindboggling to me that the railroads would go this far with it.

The mayor of the Chicago suburb of Barrington asks how one person could split a stopped train to allow traffic and first responders through in the event of an emergency.

There may be technology to compensate for some of it, but I would have questions, Karen Darch said.

The one-person crew idea is being pitched at a time when railroads are working to increase train length because delivering more cars usually is more profitable, and theyre working to expand capacity to handle even more freight as the economy improves.

Federal regulators have pushed back against the proposal, saying they may require two-person crews.

The Association of American Railroads trade group says accident data does not support requiring two-person crews. It has opposed any effort by the government to prohibit one-person trains.

During a cross-country rail journey, the engineer is at the trains controls. The conductor is responsible for the cars behind the locomotive, communicating with dispatchers and providing a second set of monitoring eyes.

Were transporting chlorine through your town in the middle of the night completely fatigued with the possibility that the computer is going to make a mistake, said Wright, a third-generation railroader and co-chairman of the advocacy group Railroad Workers United.

The National Transportation Safety Board says more than two dozen train crashes since 2004 could have been prevented by positive train control, which was required by a 2008 law approved after a commuter train collided head-on with a freight train near Los Angeles, killing 25 and injuring more than 100.

The system is aimed at preventing human error by using GPS, wireless radio and computers to monitor train position and speed. It can stop trains from colliding, derailing because of excessive speed, entering track under maintenance or traveling the wrong direction because of switching mistakes.

Congress set a 2015 deadline for having the system in place, but it wont be ready by then. Railroads blame technical challenges and problems getting regulatory approval for thousands of antennas needed to make it work.

The BNSF railroad tried and failed earlier this fall to get one-person crews approved by one of its unions. The proposal is getting more attention now because of BNSFs effort and a recent string of fiery rail crashes.

Darch initially became concerned about how increasing train traffic was blocking her citys four crossings. She helped form a rail-safety group after a 2009 derailment of ethanol tankers killed a woman at a crossing in nearby Cherry Valley, Illinois.

Normally, the conductor can uncouple cars to allow police, fire trucks and ambulances through. But if only one person is aboard, that sole crew member cannot leave the locomotive without manually setting brakes all along the train to ensure it does not roll away.

The Federal Railroad Administration has promised to propose a rule next year requiring at least two people to operate a train.

We believe safety is greatly enhanced with the use of a multiple-person crew, administration spokesman Kevin Thompson said.

However, railroad companies argue having a second person in the locomotive does not dramatically improve safety.

In many cases, that second crew member will be redundant, said Frank Wilner, who has written six books on the rail industry and previously worked for the Association of American Railroads, the federal Surface Transportation Board and one of the major rail unions.

If railroads can successfully implement the braking system and stop trains remotely, the advances might open the door to one day operating trains entirely by remote control or with robots. Existing remote-control systems are limited to use in rail yards.

The safety system clearly would add another layer of protection against accidents, said Allan Zarembski, an industry veteran who now leads the railroad engineering and safety program at the University of Delaware. But its not clear whether positive train control adds enough security to eliminate a crew member.

Its a question of how much of a degree of safety do you want? Zarembski said.