Did Fort-Worth-based Radio Shack lose its mind completely to create a grossly anti-American ad campaign pandering to Mexican soccer fans? Did the company think it has too many American customers and needed to insult them?

Radio Shack apparently realized its screw-up and pulled the plug, but the ad below did appear in a Mexican sports daily and invited soccer fans to go to their nearest Radio Shack to get an anti-American voodoo doll to torture. 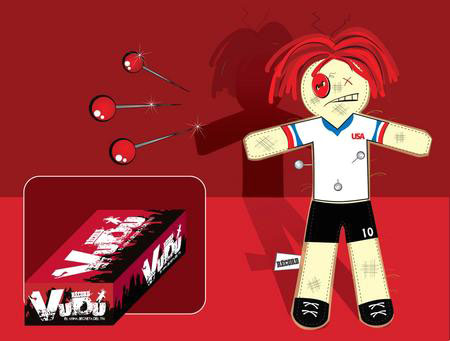 The Mexican sports daily Record had published an ad for the campaign on Tuesday, printing coupons for fans to clip and redeem at their local Radio Shack store for a voodoo-doll likeness of a U.S. player.

An illustration showed a pair of scissors slicing off the leg of a doll in a U.S. jersey; the doll grimaced in pain with its arms covered in bruises, as stuffing leaked from its No. 10 jersey, stuck with pushpins.

Record said it hoped young people would gather around televisions for the match and "apply punishments to our rivals," giving Mexico an edge to end a decade of winless play versus the Americans on U.S. soil. [Radio Shack cancels Mexico soccer-voodoo campaign, El Paso Times, Jan 28, 2009]

As I noted in U.S. Creams Mexico in Soccer, Mexicans show their hatred of Americans particularly strongly on the soccer field — like the Los Angeles match where local Mexicans drowned out the US national anthem with noise.

The company may fear a patriotic backlash like the one that clobbered Absolut Vodka after it published a reconquista fantasy map of Mexico expanded into the American Southwest.

Let's not let them get away with this unnoticed. Contact information for Radio Shack's corporate offices is here. E-mail: media.relations@RadioShack.com.