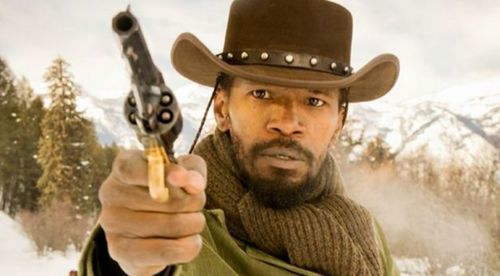 John Derbyshire's Radio Derb is on the air [Transcript | MP3] the "Anti-white triumphalism" reproduced below is my favorite part, but the stuff about Generation Identitaire is pretty good:

Anti-white triumphalism.     There seems to be no end to the triumphalism of the Left over Barack Obama's election victory last month. The lefties are so fizzed up they're letting their true feelings show, and it ain't pretty.

Prominent among those true feelings is hatred of white people. We got a good hot blast of it from movie actor Jamie Fox-x on Saturday Night Live last weekend. This is the same Jamie Fox-x (two x's) Radio Derb passed comment on two weeks ago, when he told the audience at some black award ceremony to, quote, "Give an honor to God and our Lord and Savior Barack Obama."

Well, on SNL Mr. Fox-x boasted of how in his new movie, quote: "I kill all the white people in the movie. How great is that?" The audience, who were mostly white, laughed.

Of course they did. One of my most-read columns on Taki's Magazine was the one I posted September 6th, title: "White People Are Pussies." Ain't it the truth.

A few years ago I was in conversation with white nationalist Jared Taylor, proprietor of the American Renaissance website. At that time Jared was doing a lot of radio talk shows. The hosts would generally put him on with a black guest, and let them go at it. Jared said that once he'd got the hang of this format, there were some stock questions he liked to ask the black guest. One of them was: "Do you think all white people should be killed?" Jared said the answer was always uncannily the same, almost word for word: "No I don't … but I know people that do."

They should definitely stop laughing at some point between now and 2043. That's the new date, according to a revised report from the Census Bureau, when whites will be in a minority in the U.S.A. The previous date was 2042.

New York Times black columnist Charles Blow noted that revised date in his column on Wednesday. He opened with a sneer, quote: "America's white majority just bought itself another year." In the rest of the column he kept his triumphalism pretty well under control; but then he ended by wagging his finger at us. After noticing a report on rising anti-black feeling among whites he says, quote: "The last thing we need is a racial and ethnic backlash in this country."

Actually, the last thing we needed was a situation where the founding majority of this country became a minority via criminally foolish immigration policies.

Charles Blow's colleague Maureen Dowd, still in high triumphalist mode, took a different view of the matter in her Sunday column. Being white herself, Ms. Dowd limited her gloating to the fate of white males. Quote: "The Mayans were right, as it turns out, when they predicted the world would end in 2012. It was just a select world: the G.O.P. universe of arrogant, uptight, entitled, bossy, retrogressive white guys." Well, it makes a change from Ms. Dowd's usual topic, which is, to judge from the few occasions I have looked at her column, whining about how nobody wants to go on dates with powerful, successful women like Maureen Dowd.

Harry Belafonte's gotten into the spirit of the thing, too. He was on MSNBC with Presidential tax adviser Al Sharpton Monday night. Referring to those who oppose Obama's policies, Mr. Belafonte said, quote: "The only thing left for Barack Obama to do is to work like a third-world dictator and just put all of these guys in jail. You're violating the American desire." End quote.

Well, at least he doesn't want to kill us all.