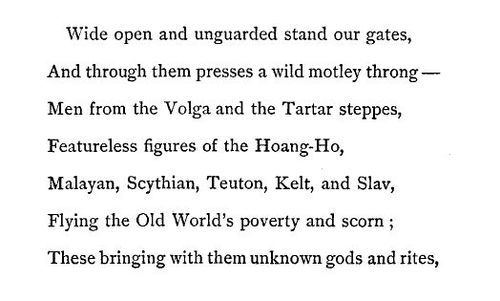 Radio Derb Is On The Air: Unguarded Gates Vs. Wretched Refuse, Etc.

John Derbyshire is at the H. L. Mencken conference in Baltimore. However, we have an hour long Radio Derb,recorded in a friend's Manhattan apartment, instead of on the Derbyshire estates.(Go here to listen, here to download the MP3.)

I started off there with a reference to, quote, "the wretched refuse of the Third World's teeming shores." That was of course an allusion to Emma Lazarus's poem "The New Colossus," which you can find in its entirety inscribed on a brass plaque in the museum attached to the Statue of Liberty, even though the Statue of Liberty did not originally have anything to do with immigration.

"Give me your tired, your poor, / Your huddled masses yearning to breathe free, / The wretched refuse of your teeming shore," wrote Ms Lazarus in 1883. Her lines are endlessly quoted by immigration romantics, some of whom seem to think they were endorsed by the Founding Fathers.

No reference to "The New Colossus" should be left standing alone without some counter-reference to Thomas Bailey Aldrich's poem "Wide and Unguarded Stand Our Gates," written a dozen years later. It's too long to quote in full, but here's the closing stanza, quote:

To leave the gates unguarded? On thy breast

Lift the down-trodden, but with hand of steel

Stay those who to thy sacred portals come

To waste the gifts of freedom. Have a care

Lest from thy brow the clustered stars be torn

And trampled in the dust. For so of old

And where the temples of the Cæsars stood

The lean wolf unmolested made her lair.