Radio Derb Is On The Air: Secularism In America, Etc.

This week’s show has a somewhat religious flavor; in fact it closes with a hymn.

One of the commonest complaints I got about my 2009 book We Are Doomed concerned my prediction, in the chapter on religion, that the U.S.A. will follow Europe into mass secularism. “Never happen!” my conservative friends said. “This will always be the God-soaked country!” Well, guess what: I WAS RIGHT! [Applause.]

The quantitative blogger who calls himself Audacious Epigone used the General Social Survey to construct a graph that I think I shall name my Graph of the Week. Title of the graph: Percentage of Americans with no religious affiliation, by year. 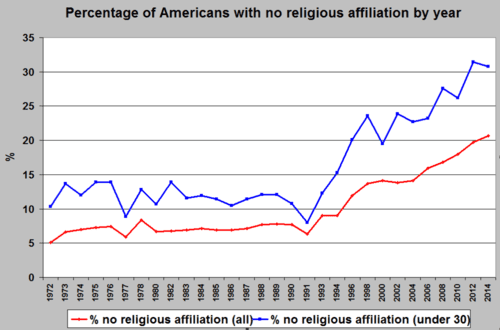 There are two lines on the graph: one for all Americans, one for Americans under 30. Remember we’re graphing no religious affiliation here, so high numbers mean more un-affiliated people. Both lines, the one for all Americans and the one for under-30s, both lines are fairly steady through the 1970s and 1980s, then in 1991 turn sharply upwards. They’ve been heading upwards ever since.

That steadiness through the 70s and 80s had un-affiliated Americans at large wobbling around six, seven, eight percent. Americans under thirty wobbled somewhat higher, around twelve, thirteen, fourteen percent. The last data point on the graph, for 2014, shows 21 percent unaffiliated overall, 31 percent for the younger cohort. Both those numbers are six percent higher than when I published We Are Doomed in 2009.

So the basic message here is: I told you so. Why don’t you listen?