Radio Derb Is On The Air: Rev’m Al Meets the de Blasio, Etc. 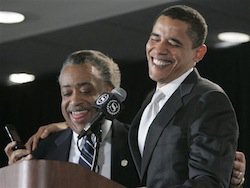 This week’s podcast naturally concentrates on last week’s elections.  Later on, though, I cover the latest episode in this great new situation comedy:  Rev’m Al Meets the de Blasios.

It’s comedy, all right, but dark comedy, that speaks ill of our current political leadership.

Mayor de Blasio signed off on the appointment [of a new second-in-command to New York City’s police commissioner], and called Al Sharpton to tell him about it.  Quote from Sharpton:

“Today I met for an hour with President Obama—about his plans for his fourth quarter. While entering the West Wing I talked by phone with Mayor Bill de Blasio about Commissioner Bratton appointing Benjamin Tucker.”

Got that?  Rev’m Al got a respectful call from the Mayor of New York while entering the White House to consult with the President.

This ridiculous clown, who can’t even speak English properly, who knows nothing, pays for nothing, and has been elected by nobody, this shyster who plays white liberal guilt like Yehudi Menuhin played the violin, is deferred to by the highest in the land.  The real power is his—kakistocracy.

Charles Dickens describes two of his characters as men who lived by their wits.  Then Dickens adds in parentheses: “or not so much, perhaps, upon the presence of their own wits as upon the absence of wits in other people.”

That’s Rev’m Al:  Not a smart man in any conventional way, but by comparison with the cringing, guilt-crazed liberals he preys upon, a towering political genius.