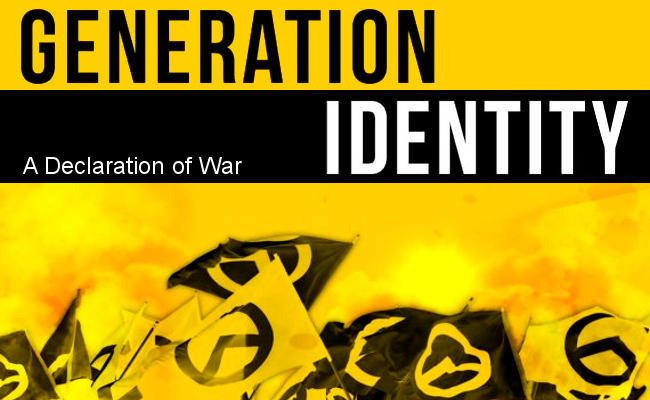 Radio Derb Is On The Air: Génération Identitaire, Et Cetera

This weekend's Radio Derb has words to say about Génération Identitaire, the young French nationalist group who occupied a mosque at Poitiers back in October.  Now, says RD:

You can see them on a two-and-a-half-minute video clip the group has just put out.  The video, which is very professionally produced, just shows 21 young French people talking into the camera, close-up and, in the best tradition of naughty French movies, black and white.  I mean the cinematography is black and white, not the speakers: they are all white.

Among other things Génération Identitaire wants to tell us:

That needs a little explanation here.  The May '68-ers, in French les soixante-huitards, were the utopian leftist-slash-anarchist middle-class student revolutionaries who took to the streets of Paris in that month 44 years ago.  They were basically protesting against the bourgeois lifestyle of their parents.  One of their slogans mocking that lifestyle went as follows: Métro boulot, Métro dodo ? "Commute to your job, commute home to sleep." That encapsulates the attitude of the soixante-huitards.  That was the bourgeois lifestyle as they saw it:  You lived to work.  No time for fun.

It was all close in spirit to the street theater we had here in the U.S.A. that same year, 1968.  It even had much the same result.  French President Charles de Gaulle called an election for the following month, June.  He won by a landslide, as Richard Nixon did over here five months later.  It turned out, in both countries, that the great majority of citizens rather liked the bourgeois lifestyle.

Now, 44 years on, the soixante-huitards are, like our own '68-ers ? think Bill Ayers ? are all Professors Emeritus in some junk Humanities discipline, or senior government bureaucrats, or Directors of do-gooding NGOs, and/or close buddies of the rich and powerful.