Radio Derb Is On The Air—Dissed By Name In The ECONOMIST, Etc.

I had a segment back there mentioning the June 4th issue of The Economist. If you would kindly turn to page 59 in that issue, third column, sixty percent of the way down, you will see a mention o 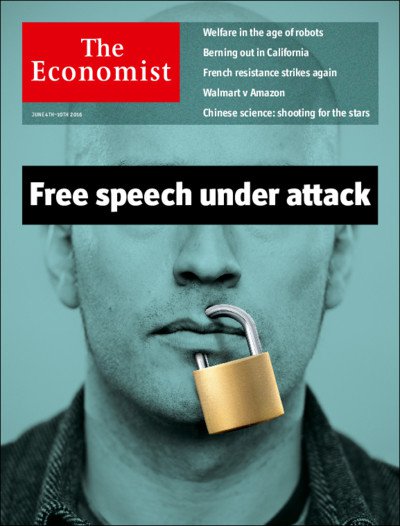 This is in a longish article about free speech on college campuses. The writer — anonymous again: The Economist mostly doesn't run bylines — brings up the speaker cancellations at Williams College in Massachusetts. Edited quote:

The trouble now, says Zach Wood, a student at Williams College in Massachusetts, is that many people want to banish views that remain widely held among their compatriots … He runs a campus group that hosts challenging speakers. "Silence does nothing," he reasons. Two of its invitations — to Suzanne Venker, author of "The War on Men," and John Derbyshire, a racist provocateur — have recently been rescinded: Ms Venker was disinvited under pressure from other students, Mr Derbyshire by the college's leadership.

End quote. "A racist provocateur," eh? I'll take it, on the principle that there is no such thing as bad publicity. And The Economist's position on the Williams College cancellations is actually critical — "creeping intolerance," they call them. So thanks for that, I guess.

Still and all: I've published two novels, both with Chinese protagonists, and two books about the history of math, and a couple of million words on every topic under the sun, from opera to metaphysics, from baseball to medieval Chinese verse, from guns to jigsaw puzzles. And all The Economist can come up with as an epithet for me is "racist provocateur"?

Life is so unfair. As the old joke tells us: It only takes one goat … though perhaps that joke no longer works in Canada.

And just as your Mom told you, there's always someone worse off than yourself. Jim Watson's achievements far surpass my petty scribblings. Watson shared a Nobel Prize for discovering the structure of DNA. That Nobel Prize notwithstanding, I bet The Economist considers him to be a racist provocateur, too.