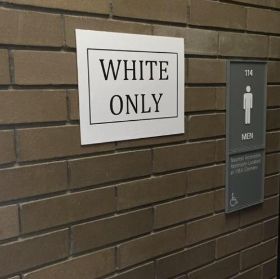 Radio Derb Is On The Air: Another Race Hoax? No! It's An ART PROJECT Race Hoax, Etc.

Radio Derb is on the air: listen here, or download the MP3.

Campus race hoaxes seem to be entering a new phase. The normal assumption, when we read about some racist incident at one of our colleges, is that it's a hoax by some black kid reaching for that victimization brass ring.

The State University of New York at Buffalo was roiled last week when signs appeared outside restrooms and such saying WHITE ONLY and BLACK ONLY. Black students were weeping and cowering in terror all over the campus, the New York Times tells us.

I read the headline and the first couple of sentences, thought: "Ah, another hoax by some stupid black kid," and turned the page. I was wrong: this was an art project.

The perp here was one Ashley Powell of the college's Art Department, who told the Black Students' Union that she had posted the signs as an effort to, quote, "expose white privilege."

Responding to Ms Powell's confession, college authorities exercised their white privilege by expelling her … Nah, just kidding. Ms Powell is of course a heroine on campus. I'm betting MSNBC has already offered her a job.