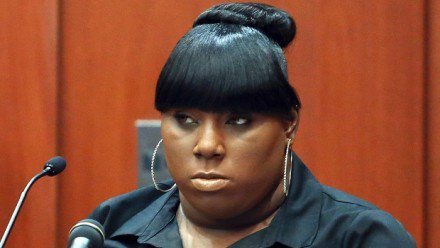 One thing that's remarkable about the testimony of Rachel Jeantel is that it puts on display a black whom one would simply never see under the standard media unspoken rules. Any depiction of a black who came across as so deeply ignorant, frankly stupid, transparently hostile, and flagrantly dishonest would be met with accusations of racism because it is so unflattering. One sees such blacks turning up in youtube videos of course, but I'm not sure I've seen any such in the media, even in news reports of crimes, which, I'm sure, are likewise sanitized for public view.

That's why Law & Order shows witnesses to cunning Park Avenue killings. The homicides they witnessed may not, technically, have happened, but they are a lot more interesting than the witnesses to actual killings.

Back in 2012, the press wanted this trial to be, to use  Bonfire of the Vanities terminology, the triumphant culmination of "the hunt for the Great White Defendant," with George Zimmerman as Sherman McCoy, perfect for kicking off Obama's re-election campaign. Predictably, though, it's just turned into another Herbert 92X-style "piece a s—" case. (You can read Tom Wolfe's bravura description of Asst. D.A. Kramer's thoughts on pp. 105 to 108.)

This is reminiscent of the Supreme Court's 2002 decision that effectively banned the death penalty for murderers with IQs of 70 or below. In the extended families of Supreme Court justices, IQs of 70 or less are inevitably associated with a clear organic cases of mental retardation, such as Down Syndrome. But among African Americans, about 1/6th are no more than 70 IQ, just as about 1/6th are smarter than the average white American.