Q. Who Put All Those Blacks in Prison? A. Other Blacks.

Power and Punishment: Two New Books About Race and Crime

LOCKING UP OUR OWN

Crime and Punishment in Black America

… Two new books offer timely and complementary ways of understanding America’s punitive culture and, in the process, stark pleas to abolish it. In “Locking Up Our Own,” James Forman Jr. explains how and why an influx of black “firsts” took the municipal reins of government after the civil rights movement only to unleash the brutal power of the criminal justice system on their constituents; in “A Colony in a Nation,” Chris Hayes shows that throughout American history, freedom — despite all the high-minded ideals — has often entailed the subjugation of another.

Forman, a Yale Law School professor and former Washington, D.C., public defender, has written a masterly account of how a generation of black elected officials wrestled with recurring crises of violence and drug use in the nation’s capital. …

Ultimately, Washington’s black officials embraced the Nixonian law-and-order mood of the nation, passing increasingly tougher laws and adopting aggressive policing practices into the 1990s. Marion Barry, Washington’s future mayor, claimed the mantle of drug warrior (before he fell victim to his own addiction), and the stark and visible pattern of African-Americans increasingly locking up their own was replicated elsewhere. “When an urgent problem required a short-term solution, law enforcement was regarded as the only answer,” Forman writes. In 1978, Washington appointed its first black police chief, Burtell Jefferson, a staunch advocate for mandatory minimum sentencing, to lead the nation’s first black-majority police department. By 1990, there were 130 black police chiefs in the United States and more than 300 black mayors.

Given a century of brutal, anti-black racism in the criminal justice system after the Civil War, these developments give rise to some obvious questions: When African-American officials finally gained a measure of control over the machinery of the law, why did mass incarceration happen on their watch? In other words, why did they lock up their own?

Forman offers three explanations. First, black officials did not see mass incarceration coming. No one did, he argues. It was “the result of a series of small decisions, made over time, by a disparate group of actors.” (Hayes makes the same point in his book.) Second, after legal segregation fell, African-American class biases came to the fore. Class privilege meant that middle-class and elite blacks had a smaller chance of exposure to criminal victimization and the full hammer of the law, especially long prison sentences. Citing a 1966 University of Michigan study, Forman writes that “a surprising number” of working-class black cops “didn’t like other black people — at least not the poor blacks they tended to police.”

The third reason is a big deal and a major breakthrough. Forman’s novel claim is this: What most explains the punitive turn in black America is not a repudiation of civil rights activism, as some have argued, but an embrace of it. “African-Americans have always viewed the protection of black lives as a civil rights issue, whether the threat comes from police officers or street criminals,” he writes. “Far from ignoring the issue of crime by blacks against other blacks, African-American officials and their constituents have been consumed by it.” Forman recalls his own experience as a public defender and the case of a 15-year-old first offender who was facing sentencing for handgun possession and a small bag of pot; a black judge, hearing Forman’s plea for leniency, was unmoved. “Dr. King didn’t march and die so that you could be a fool, so that you could be out on the street, getting high, carrying a gun and robbing people,” the judge admonished. “No, young man, that was not his dream.”

In this way, post-civil-rights leaders reimagined Dr. King as a crime crusader. In 1995, one year after Bill Clinton signed the biggest crime bill in American history, the nation’s first black United States attorney for the District of Columbia, Eric Holder, announced a major anti-crime initiative called Operation Ceasefire at a Martin Luther King Day celebration in Arlington: “Did Martin Luther King successfully fight the likes of Bull Connor so that we could ultimately lose the struggle for civil rights to misguided or malicious members of our own race?”

This wasn’t the politics of respectability; it was what Forman calls the “politics of responsibility.” Dr. King’s legacy had become fodder for a national trend of personal responsibility jeremiads aimed at black America. This moment peaked about a decade ago just when Barack Obama, an exemplar of propriety, kicked off his presidential candidacy and Bill Cosby was wrapping up a national “call out” tour, dispensing the gospel of tough love in black communities.

Okay … but here’s a graph I found on Wikipedia within 3 minutes showing the homicide rate in Washington DC (blue line) and nationally (red line): 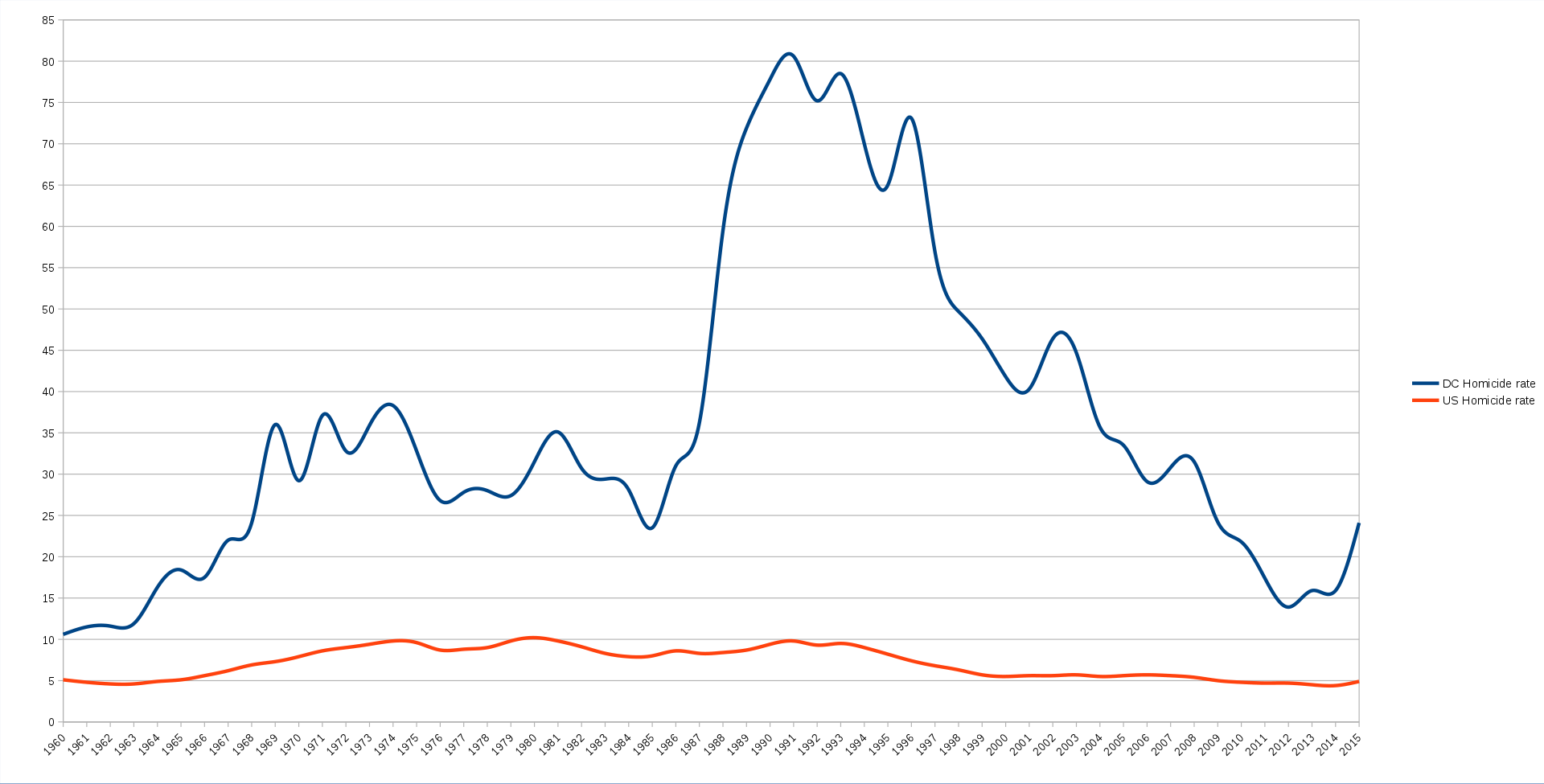 This graph sure puts a different perspective on things than all that verbiage.

Back in the early 1960s before the triumph of the civil rights movement and the Miranda ruling, D.C.’s homicide rate was about twice the national average. By the early 1990s, the rate had octupled in absolute terms and it was eight times the national average. Since the beginning of the time in the mid-1990s that this book complains about, the homicide rate in D.C. fell by about 80%.