Public Health Precautions Here and There

Around the world, nations far from Mexico have chosen to err on the side of caution regarding the Mexican flu outbreak, including checking who gets in: [Countries tighten borders, Telegraph of India, April 28, 2009].

New York, April 28: Countries around the world began tightening their border and immigration controls today as the number of confirmed cases of swine flu continued to rise. [...]

Health officers at three Japanese airports also were being deployed today to check passengers before they disembarked from flights coming from Mexico, Canada and the US. Travellers suspected of having the flu would be quarantined and examined further at medical facilities, news agencies reported, citing the Japanese health minister.

At least eight other countries in Asia were checking air passengers arriving from North America, and China was tightening land border checks as well. Hong Kong, Taiwan and Russia were set to quarantine passengers suspected of having the flu.

Naturally, our borders are open and will remain so. A nuke could go off in Tijuana, and the borders would stay open: Napolitano: Border With Mexico to Stay Open for Now.

At his point, media hysteria has gotten thick. But some of the photos accompanying the flu story are irresistable...

Below, a traveler from Mexico arrives in Miami with a big suitcase — he must be planning a long stay. 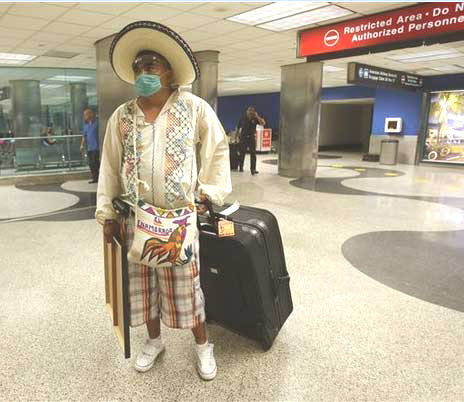