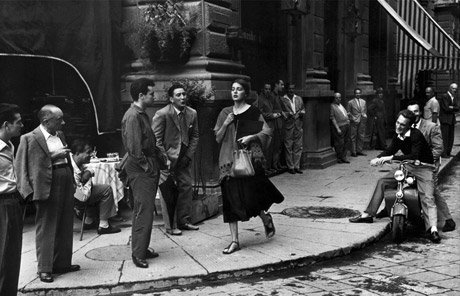 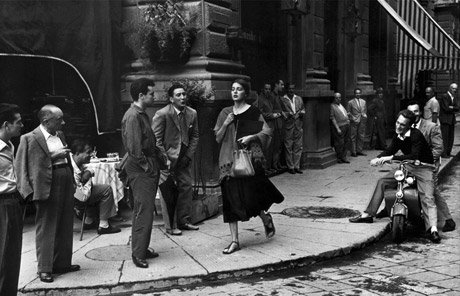 My impression of Italy from the week I spent there in 1980 was that Italian men didn’t need disinhibiting [from alcohol] to get over their shyness so they could start hitting on women. That’s just what they did, at least in the touristy cities. It was like a country full of Silvio Berlusconis. Above is Ruth Orkin’s 1951 photo American Girl in Italy, and that’s what Florence was like in 1980, too.

By the way, the American Girl in the photo is 83 today and said in August:

The girl in the picture and the photographer were out trolling for reactions. The photographer liked the reactions the American Girl got the first time she walked down this particular street in Florence, so she had her go around the block and do it again, which sent the hubba-hubba meter to eleven. (But, that’s still pretty much what it was like in 1980, so this picture is merely exaggerating reality to convey reality, which is pretty much what photography is all about.)

P.S. The American Girl went home to America, then went back to Italy and married an Italian man.

Of course, the reason American women like to decorate their apartments with this picture is because it’s so sexily Italian. They don’t get that kind of reaction from white guys on the streets of America, except maybe in the most self-consciously Italian neighborhoods.

Back in 1999, The Onion ran a Point / Counterpoint on this general subject:

European Men Are So Much More Romantic Than American Men By Alyssa Lerner, Junior, Boston University

I just got back from a semester abroad in Europe, and let me tell you, it truly was the most magical, amazing experience of my entire life. The French countryside was like something out of a storybook, the Roman ruins were magnificent, and the men, well, European men are by far the most romantic in the world. …

I’m a 25-year-old carpenter living in Rome, and I don’t mind telling you that I get all the action I can handle. I’m not all that handsome or well-dressed, and I’m certainly not rich. In fact, my Italian countrywomen could take me or leave me. But that’s just fine, because Rome gets loads of tourist traffic, and American co-eds traveling through Europe are without a doubt the easiest lays in the world.

Being European gives me a hell of an advantage.