In 2010, Oregon-residing Mohamed Mohamud (a naturalized citizen born in Somalia) planned to mass murder Americans at a Portland Christmas tree-lighting ceremony where typically hundreds of families show up for the festivities. He rang his cell-phone twice, thinking a huge bomb would go off, but it was a fake set up by the FBI to take out the would-be killer.

Mohamud was sentenced on Wednesday to 30 years prison time, despite the fact that the prosecutor recommended 40 years.

Interestingly, the case began when his father contacted the FBI, as noted in the video below, about his concerns that his son was becoming drawn to jihad. 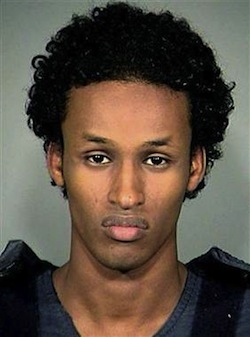 Mohamud (pictured) is quite a piece of work, having decided in high school that he didnt like Americans and wanted to pursue jihad so he could kill lots of infidels. When a supposed confederate remarked that the Christmas event would include many children, Mohamud responded, “Yeah, I mean, that’s what I’m looking for.”

But now hes all sorry, apologizing to the Muslim community for making them look bad.

And despite many cases like this one of Somalis being enemies to this country, Washington continues to admit them into American communities, including 8,278 Somali refugees in FY 2014.

PORTLAND Mohamed Mohamud, the young Somali American convicted of trying to bomb Portlands downtown square while it was filled with holiday cheer, was sentenced Wednesday to 30 years in prison.

Federal prosecutors recommended a 40-year sentence for the 23-year-old. The defense asked for 10 years.

He was arrested Nov. 26, 2010, after pressing a keypad button on a cellphone that he believed would trigger a bomb where thousands of people gathered for the annual lighting of a Christmas tree.

I want to apologize to everyone in the community and everybody who was there, Mohamed Mohamud said during his sentencing for the attempted bomb plot.

He admitted what he did was terribly wrong and apologized to the Muslim community for bringing shame to their religion.

U.S. District Court Judge Garr King said the sentence was necessary due to the seriousness of the crime and to deter others who might consider similar acts.

This is a sad case, said King.

His mother, father and sister wept as they told the judge that he was an immature boy at the time of the plot and should be given a second chance at life with a shorter sentence.

In reality, nobody was in danger. The truck bomb was a fake supplied by undercover FBI agents posing as al-Qaida recruiters. The undercover agents made friends with Mohamud a teenager at the time after learning he had written for an online jihadi magazine and exchanged emails with accused terrorists.

Jurors rejected Mohamuds entrapment defense at his January 2013 trial. But his lawyers continued to point out that the former Oregon State University student had no plans to attack until after he met the undercover agents.

Mohamuds sentencing was originally scheduled for 2013 but was pushed back a year after the governments disclosure that warrantless overseas wiretaps helped make its case. The defense unsuccessfully sought a new trial.

Lead prosecutor Ethan Knight wrote in his sentencing memorandum that Mohamud never wavered in his willingness to kill thousands that November day.

Really the essence of this case is one mans choice to kill as many people as possible, Knight said.

In a reply submitted two weeks ago, Chief Deputy Public Defender Stephen Sady described the recommended sentence as draconian. He noted that Abu Khalid Abdul-Latif only got an 18-year sentence last year when he was sentenced for plotting to attack a Seattle military processing station with machine guns and grenades.

The evidence at trial established that the defendants murderous conduct was the culmination of a mindset that began to develop years before the commencement of the governments investigation, Knight wrote in the August 2013 filing. Over that period, the defendant became radicalized to such a startling degree that he was willing to commit chilling acts of violence in the name of Islamic extremism.

Unlike Abdul-Latif, Mohamud has shown remorse and did not have a prior criminal background, Sady wrote.

The defense of entrapment does not posit that everything is the governments fault and that he is guiltless, Sady wrote in the Sept. 19 reply. On the contrary, he recognizes that the government had legitimate concerns regarding his writings and activities.