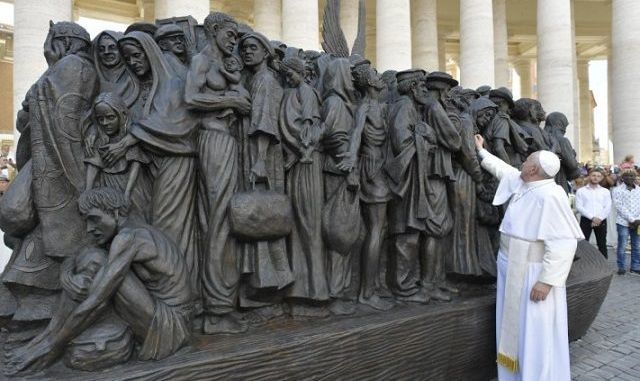 The new art work in St. Peter’s Square makes quite a statement: It celebrates diversity and open borders, which Pope Francis has always favored. The bronze sculpture weighs 3.5 tons, is 20 feet high and depicts 140 migrants of varied backgrounds. It’s the first sculpture in the square in 400 years, and the first without a biblical subject—although the pope would probably disagree with that description. It’s brutal in style, not spiritual—none of that Michelangelo Pieta stuff for Pope Francis, who is a modern globalist guy.

It is somewhat shocking for such a secular, political piece of art to be welcomed in the Vatican, but that aspect has not been mentioned in any report I’ve seen. 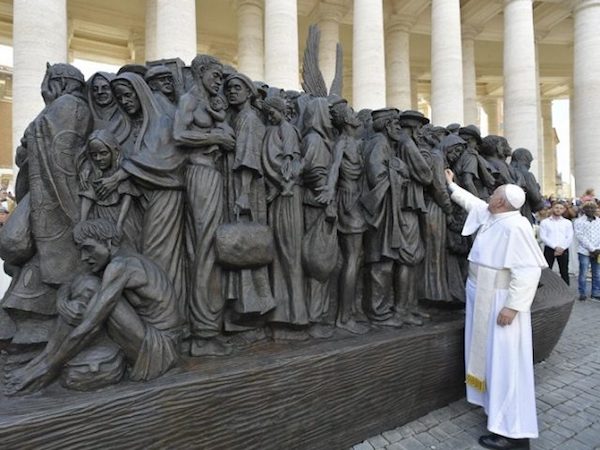 The piece is very dark — quite a switch from the rest of the Vatican sculptures which are light stone. Presumably the pope wants the bronze and its open-borders message to be noticed by everyone who visits — as it will be because of its huge size and unusual color.

ROME — Pope Francis unveiled a massive bronze sculpture depicting 140 migrants in Saint Peter’s Square in the Vatican Sunday, the first sculpture to be installed in the piazza in over 400 years.

The 20-foot tall, 3.5-ton bronze sculpture was created by Canadian artist Timothy Schmalz at the behest of the Vatican’s office for Migrants and Refugees, after impressing the pope with his sculpture “Homeless Jesus” in November 2013.

The migrant sculpture bears the title “Angels Unaware” in reference to the biblical passage from the Letter to the Hebrews: “Be not forgetful to entertain strangers: for thereby some have entertained angels unawares.”

The artist told Crux, an online Catholic news outlet, that the figures in the sculpture represent “a tapestry of people from all historical periods of time. From ancient migrant people to indigenous migrant people to contemporary Syrians and Africans.” He chose the number of 140 figures to create a symmetry with the 140 columns along Bernini’s iconic colonnade.

In unveiling the sculpture at midday Sunday, the pope was accompanied by the artist along with four migrants. Earlier that morning, the pontiff celebrated an open-air Mass in the Square dedicated to migrants and refugees.

During his Angelus message, the pope said that he was inaugurating the work to emphasize the Church’s commitment to migrants and refugees. (Continues)