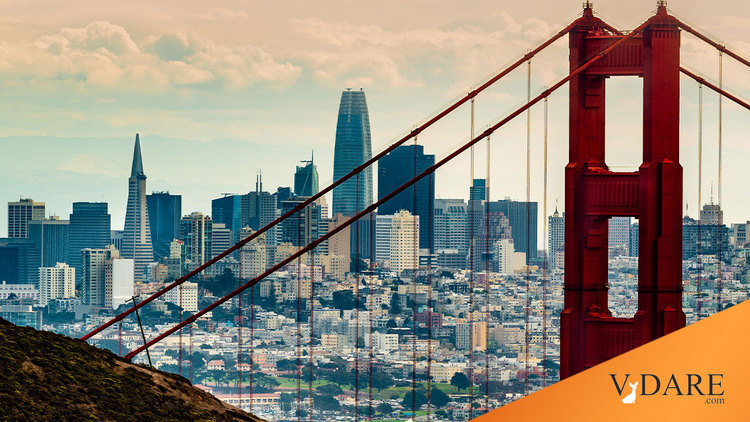 In San Francisco, the low-intensity warfare of hipsters and immigrants against tech workers has been boiling along. The city has experienced a substantial boom in tech business, with new workers paying top dollar for apartments, and housing has gotten more expensive as supply declines and demand increases. 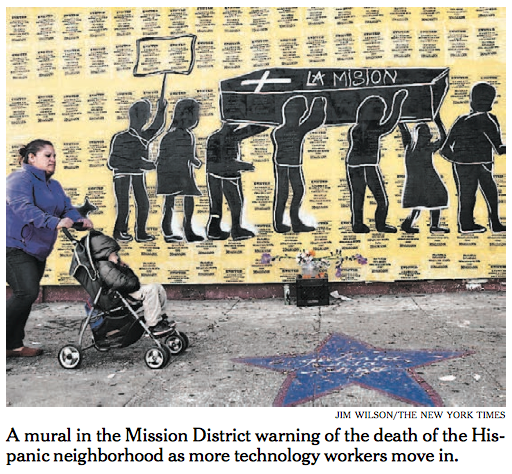 The “anti-gentrification” activists have gotten media attention by blocking the private Google buses that carry SF-residing workers to headquarters in Silicon Valley, supposedly because the shuttles use city bus stops. The pests show up with signs like “F Off Google” and “Eviction Free San Francisco” (shown below) as a shakedown strategy. 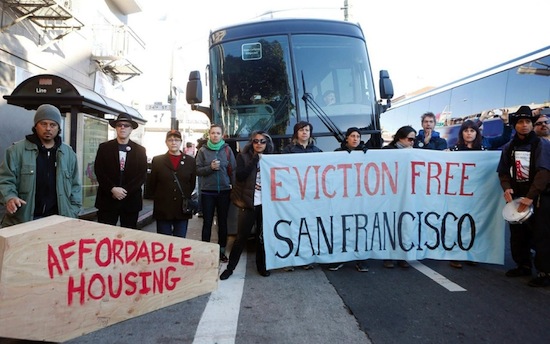 Judging by the media accounts, one might think that San Francisco is a crazed outpost of success-hating anarchists. To be sure, the city is extremely liberal and spends a huge amount of money on goofy big-government programs, like ethnically correct coddling of Hispanic crack dealers. But a recent poll shows residents are more sensible about the Google bus issue at least than commie activists might have hoped.

So the perfect diversity Avalon that San Francisco has hoped to create still needs some negotiation it seems.

SAN FRANCISCO (KGO) — A new poll reveals something that may surprise you about those controversial shuttle buses which carry employees from San Francisco to Silicon Valley. The survey reveals the protesters don’t reflect the feelings of most San Franciscans.

The Bay Area Council paid for the poll and members told ABC7 News they were surprised by the results.

We have all seen the protests that have happened around these shuttle buses. Protesters have said they’re angry about the buses using Muni bus stops and about the fact that the increase of tech workers has created a housing crisis in the city.

The Bay Area Council wanted to find out if the majority of the city had these negative feelings toward tech and say they found the opposite. But they say people do want some regulation.

The survey revealed that at least 57 percent of people have a favorable view of the shuttles and 67 percent support letting the buses use some Muni stops. However, 72 percent do want the city to recover the cost of using those stops. They would like them to charge those companies.

Bay Area council did outsource the polling to EMC research, so they do feel the results are unbiased.

“We’re very comfortable that the results are extremely credible. We surveyed 500 likely San Francisco voters representing the demographic breakdown of the city and actually the representation among folks who self affiliate themselves with the tech industry was really small,” Bay Area Council spokesperson Rufus Jeffris said.

They did not ask the people being polled about housing. The Bay Area Council calls that a complicated issue and says it’s a generation of failed policy.